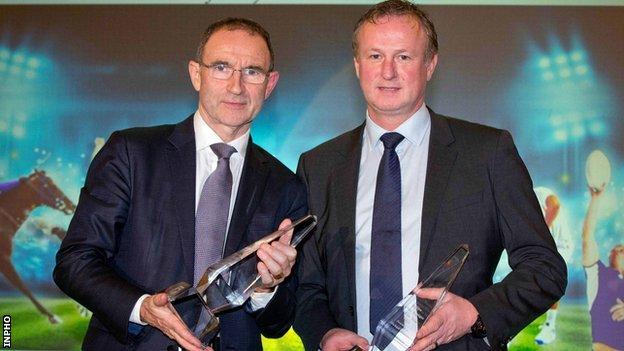 Michael O'Neill and Martin O'Neill have been named joint-winners of the Philips Irish Sports Manager of the Year award.

The Northern Ireland and Republic of Ireland football managers both guided their teams to Euro 2016 qualification in 2015.

It's the first time in the award's 33-year history that a Northern Ireland football manager has been recognised by the judging panel.

"For us to join Michael (O'Neill) is great," said Martin O'Neill.

"I must admit that I felt really envious of him enjoying himself (after qualifying) when we were still in the doldrums, but we were delighted to qualify."

Northern Ireland sensationally topped their group to qualify automatically for the finals while the Republic booked their spot after a play-off victory over Bosnia-Herzegovia.

The judging panel consisted of sport editors in Ireland.

The only previous joint-winners were Cork hurling and football managers Billy Morgan and Father Michael O'Brien in 1990.