Arsenal ended a good week by going top of the Premier League courtesy of a win at Aston Villa that leaves Remi Garde's side further adrift at the bottom.

The Gunners, who reached the last 16 of the Champions League in midweek, led through Olivier Giroud's early penalty.

Aaron Ramsey then started and finished a superb counter-attack to reward the away side's first-half dominance.

Jack Grealish returned to action for Villa, who improved after the break but wasted a number of good chances.

Villa's defeat, coupled with positive results for some of their rivals, means they are now eight points from safety with only six points from 16 games.

In sharp contrast, Arsene Wenger's side have won 10 league games this season and lead the division, a point ahead of Manchester City, who beat Swansea on Saturday, and Leicester, who face champions Chelsea on Monday night. 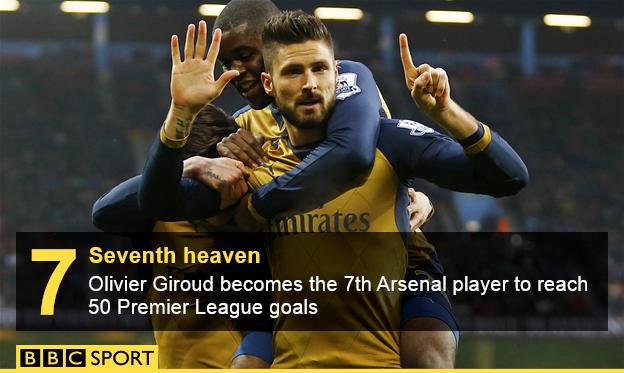 Giroud was Arsenal's hero in Greece on Wednesday, scoring his first Gunners hat-trick as they claimed the win they needed over Olympiakos to qualify for the last 16 of the Champions League.

The third of those goals came from the penalty spot and he was again given the opportunity to score from 12 yards in the eighth minute at Villa Park when Alan Hutton was adjudged to have pulled back Theo Walcott in the box.

Initially, it looked as though referee Kevin Friend had ignored Arsenal's appeals before finally - and correctly - pointing to the spot, much to the anger of the home crowd.

With boos ringing around the stadium, Giroud coolly side-footed home his 14th goal of the season to become the seventh player to score 50 Premier League goals for Arsenal, achieved in 113 games.

Giroud was not the only Arsenal player to reach a notable landmark at Villa Park - Petr Cech has now kept 169 clean sheets (in 349 games) in the Premier League, equalling David James record (in 223 fewer games).

Earlier this season, Aaron Ramsey found himself at the centre of a row between Wenger and Wales boss Chris Coleman over a hamstring injury that cost the player a month of the campaign.

Now fully fit, the 24-year-old is central to Arsenal's midfield and his energetic box-to-box performance was the stand-out for the visitors.

The second goal epitomised this, as Ramsey won the ball in his own half courtesy of a well-timed tackle before charging forward to overload the Villa defence and receive Mesut Ozil's unselfish pass - the German's 13th assist of the campaign - for a simple finish into an unguarded net.

With Jack Wilshere, Santi Cazorla and Francis Coquelin injured, Ramsey's return to full fitness and form is a timely boost for the Gunners.

Villa have now not won a game since the opening day of the season, when Rudy Gestede's goal gave them a 1-0 victory at Bournemouth.

Since then they have set two unwanted club records of 15 league games - and nine home matches - without a win, while also changing their manager, bringing in Garde to try and save their season.

There was little evidence of a positive impact by the former Arsenal midfielder during the first half as the away side's superior movement and pace was reflected in the scoreline.

Garde will be encouraged by his team's second-half display, which showcased far more effort and endeavour.

However, despite some good approach play, particularly through Hutton down the right, they were unable to find a finish to dislodge Arsenal from their comfort zone.

Gestede and Scott Sinclair were the worst offenders, heading wide from close range when they should have done better.

Leandro Bacuna also narrowly failed to find the target with a curling long-range effort and substitute Adama Traore found the side-netting after beating four men down the right.

Man of the match - Aaron Ramsey

Aston Villa manager Remi Garde: "I know there is a big expectation at home but we were playing the best team currently in England. I don't have any reproach for my players.

"I have the feeling that the best team won but I have regrets. To concede an early goal - we did not want that. You don't expect that.

"In the second half it was a good reaction. The performance is not the one you expected but I never saw a player wearing the Villa shirt that was not proud to do that.

"I knew the size of the challenge before coming. Now we have games that we have to win against direct opponents. The next few matches will be crucial for us."

Arsenal manager Arsene Wenger: "It was a perfect week for us. We spent a lot of energy away in the Champions League on Wednesday but found the resources to win again here today, in another away match.

"In the first half we were in control but in the second half the legs had gone a bit. But we were mature, and maybe a bit lucky on one or two occasions, but overall it is great to come here and to win away again.

"This season is so unpredictable that you just focus on yourself and try to play well in the next game. You know if you are consistent then you have a chance. This is an opportunity for us to find that consistency."

Aston Villa face a crucial period. Their next game is at Newcastle next Saturday, followed by West Ham (h), Norwich (a) and Sunderland (a).

Arsenal face a huge encounter with Manchester City at Emirates Stadium on 21 December. They will learn their opponents in the last 16 of the Champions League on Monday.