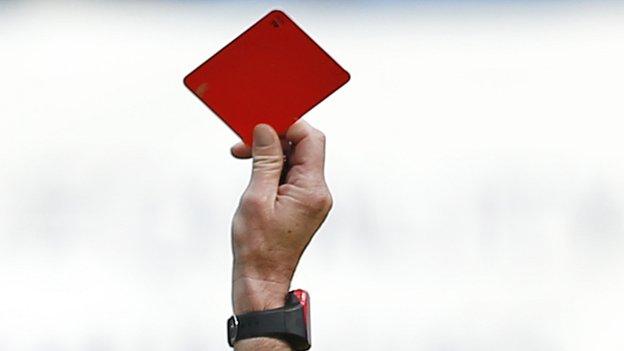 Nearly two-thirds of football referees in England say they experience verbal abuse on a regular basis, according to a new survey seen by the BBC.

More than 2,000 referees - the majority at grassroots level - responded to questions about the abuse they receive and how well the Football Association's Respect programme is working.

Nearly one in five said they had experienced physical abuse.

"There is no room for complacency and we remain vigilant," said the FA.

It told the BBC: "More extreme incidents such as referee assaults thankfully remain few and far between.

"Across an estimated 1.2 million games last season the number of reported incidents amounted to a tiny fraction of 1% - which puts the scale of the problem into context."

But Dr Jamie Cleland from the University of Loughborough, one of the academics involved in the research, warned: "These findings are quite concerning for the FA because without referees the grassroots game would not exist.

"Referees are the bedrock of the amateur game because you need a referee to turn up in order for the match to go ahead and so these are a warning sign for the FA."

Case study: 'He threatened to kill me'

The 5 live Investigates programme has been given exclusive access to the research, which was carried out by academics at Loughborough, Portsmouth and Edge Hill universities.

A total of 2,026 referees across England, the Isle of Man, Jersey and Guernsey responded to the survey. Thirty-two percent are currently at Level 7 - junior referees aged 16 or over. The second biggest response, 30%, was from those at Level 5 - senior county referees. The survey also included a small number of responses from referees within the Football and Premier Leagues.

Findings reveal that 22% experience verbal abuse at every match, while 38% said they were abused every couple of games. In addition, 19% had been the victim of physical abuse at some time.

Donald Distin from Devon, who has been a referee for 15 years, was attacked by a player as he showed a red card during a game last year. "He just punched me. My feet left the ground and I was on the floor," Mr Distin told the programme.

"The bruising went all the way down through my chest and my face. My eye was bloodshot - it was horrific. I couldn't see my grandson because he was so upset."

The player was subsequently jailed over the attack.

Mr Distin told the programme he still experiences abuse at matches. "I did a game the other day - it was a local derby and there were 10 cautions and two sending-offs. I sent someone off the field of play and he came towards me and said 'I'm going to kill you', as well as a load of expletives."

During the 2014-15 season there were 100 assaults on match officials and 374 incidents of improper conduct including physical contact and threatening and/or abusive language.

Officials were also asked about the FA's Respect Programme which began seven years ago to improve behaviour among players and spectators. More than half, 54%, said the campaign had been successful.

Comments included: "Respect levels, in general, have been very good from my experience. The knowledge of the Respect campaign has been good at most clubs."

Another said: "I referee adult football and there has been a marked improvement in behaviour. There are fewer incidents of irrational behaviour."

But nearly a third felt that the campaign had been unsuccessful.

"What we've seen from within the data is a real outpouring of emotion from referees. They are saying that the campaign has been somewhat successful but they are then providing a diary-like analysis of the experiences that they are receiving if not at every match, every couple of matches," added Dr Cleland.

One official told the survey: "Behaviour of players and coaches has not improved in the slightest and all this shaking of hands pre-match is meaningless, totally meaningless."

Another added: "At the level I referee, I don't believe the Respect campaign has made much of a difference. The behaviour of players and spectators, shouting, swearing etc, if anything has got worse since I started refereeing."

An FA spokesperson told 5 live Investigates that "incidents of dissent are never pleasant and the notion that they are in any way part and parcel of the game is one that the Respect Programme was established to dispel".

The spokesperson highlighted a 23% decline in dissent cautions over the past seven seasons and added: "With a significant drop in the occurrence of this type of caution over the life of the programme, it is clearly working."

But they also conceded that one serious assault is one too many.

"The FA engages directly with referees through its own research and gave its support to the independent study which - when drilled down - indicates that only 7% of referees feel that Respect isn't working outright."