Leicester's incredible start to the season continued on Saturday as they beat Newcastle to move top of the Premier League table.

The Foxes were bottom of the table in April, but seven months on, led by the goals of prolific striker Jamie Vardy, they have lost only one of their first 13 league matches.

Claudio Ranieri's in-form team host second-placed Manchester United next weekend, with the chance to extend their unlikely lead at the top.

Leicester goalkeeper Kasper Schmeichel, who has been at the King Power Stadium since June 2011, tells Match of the Day 2 what is behind his team's remarkable rise.

'We are open, expansive and fast' 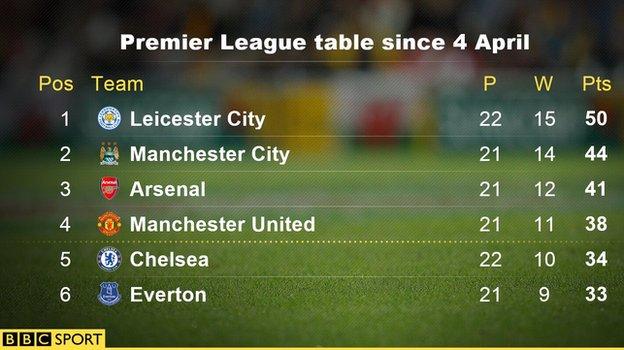 Leicester's impressive form began in April when they were bottom of the table with 19 points, four points adrift of safety with eight games to go. Starting against West Ham on 4 April, they won six and drew one of their next eight games - if the league had started then, they would be even further clear at the top.

Kasper: "The way we finished last season has played a massive part in how we have started this one.

"For starters, we came into it with a lot of confidence, in contrast to last year when we were finding our feet in the Premier League and found it very difficult to win games at all - before Christmas we went more than three months without a victory.

"At the end of season, we found a style of play that works - it can be a bit scruffy because we are open, expansive and fast and we concede more goals than we want to, but it is effective and we are entertaining to watch.

"Manchester United are probably still reeling from what happened to them at our place last season when we beat them 5-3 and they will want some sort of revenge.

"But we will go into the game believing we can win it and our mentality at the moment is that we will always get at least a point.

"More than anything, though, we know what has got us here is hard work. We will not stop doing that.

No tinkering from the Tinkerman

Claudio Ranieri replaced Nigel Pearson as Foxes manager over the summer and added Paolo Benetti to his staff. But he also retained Pearson's right-hand men Craig Shakespeare and Steve Walsh as his assistant managers and has not made sweeping changes to the team. Of the Leicester side that started against Newcastle, only N'Golo Kante joined since Ranieri took charge.

Kasper: "It is to the manager's credit that he did not just come in with all his own people and change absolutely everything.

"He saw that he had a team and a style of play that was working quite well, and he also inherited a backroom team that were very good at what they did too and who knew the players already.

"There was a meeting early doors when he arrived where we said 'have a look at what we are doing - we have got a way we have been doing things for a few years'.

"Claudio has used it to his advantage. He does some things differently, of course, but part of the reason we have got the results we have is because he realised he did not have to alter too much, too soon."

'Claudio speaks to the players in their own language'

Ranieri is known for being a hard taskmaster in training but he has given his Leicester players plenty of performance-related incentives, such as pizzas for clean sheets and, after Saturday's win at Newcastle, beers for the coach journey home.

Kasper: "Everyone is enjoying playing under Claudio - he is a very personable guy when he talks to you and gets his message across.

"What definitely helps is that he is able to speak to each player individually in their own language, something he does in team-talks when he is addressing the whole squad.

"He has the language skills to speak Spanish or French when he has to and make sure he is understood.

"That makes a big difference. For players coming to a new country things can be difficult enough even enough anyway, but not speaking the language makes thing very difficult. It's not a problem with Claudio, though."

Never giving up - and coping with defeat

Leicester have picked up 10 points from losing positions in six Premier League matches this season, more than any other top-flight team. Since their only league defeat of the season - against Arsenal on 26 September - they have won five of their last six league matches, including the last four.

Kasper: "We don't want to have to come back in matches, but it is testament to the character in our squad that we can do it when we have to.

"There was no specific match or moment when it started, it has been more of a gradual thing.

"We have a lot of players in our squad that have been here for three or four years, including myself.

"Sven-Goran Eriksson brought me here but the manager who signed a lot of us - Nigel Pearson - had the mentality that we should never stop and keep going until the end, and he looked for the same attitude in the players he brought in.

"When we fight back, we play really well but we played really well from the start against Newcastle on Saturday and it was nice to show we could take the lead and control a game - there is no need to come from behind when you do that.

"Of course we will lose some games but it is the way it happens that is important. Claudio has always said that he does not mind if we lose as long as it is in the right manner.

"Against Arsenal, they were ruthless but we never gave up and gave ourselves a chance in the game. It is easier to accept a defeat when you have given absolutely everything."

'We think Jamie will score every time he plays'

Jamie Vardy's goal against Newcastle meant he equalled Ruud van Nistelrooy's record of scoring in 10 consecutive Premier League games - his next target is the all-time top-flight record of 12 consecutive games by Sheffield United's Jimmy Dunne in the old First Division in 1931-32.

Kasper: "I've known Jamie since he joined Leicester from Fleetwood in May 2012. The only thing that has changed about him since then is that he actually works even harder now than he did then.

"He struggled at first with the step up to the Championship but with hard work he made it, and now he is in the form of his life.

"At the moment Jamie thinks he is going to score every time he plays, and the rest of the team thinks he will too.

"To score as many goals as he does, you have to put yourselves in the right position and he does everything he can to give himself as many opportunities as he can.

"That is so important to the success of the team. When we are in trouble, we know we can play the ball into the channel and Jamie will run it down.

"Not only does that mean the ball does not come straight back towards us, he puts the opposition defenders under so much pressure that it often leads to chances for us, and Jamie is sticking them away too." 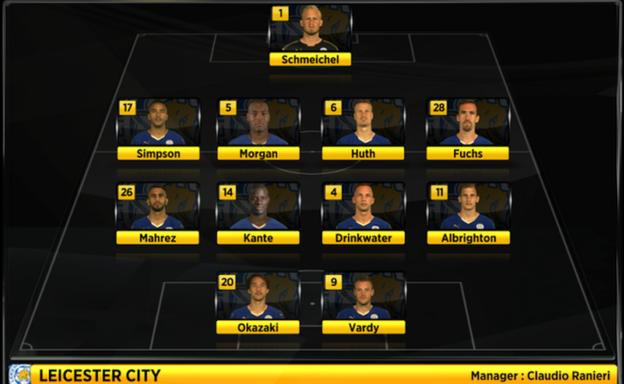