The Championship side won the shootout 3-1 to progress to the last eight after a goalless 120 minutes at Old Trafford.

"It is more like the casino, red or black," Van Gaal said. "We trained yesterday on penalties, but it is like that. I cannot take them."

Andreas Pereira scored his but England trio Wayne Rooney, Michael Carrick and Ashley Young all missed from the spot.

United lost their fourth successive penalty shootout and the Dutchman saw his side knocked out of the competition by a lower-league team for the second successive season following defeat by MK Dons last term.

United defender Daley Blind put the ball into his own net only for Boro striker Kike to be flagged offside.

Van Gaal added: "They were lucky but of course you can force the luck.

"We have created a lot of chances, especially in the second half and in extra time. We had chances from one metre, two metres in front of the goal. We have to finish those.

"In football it is always the goals that are counting and not the chances." 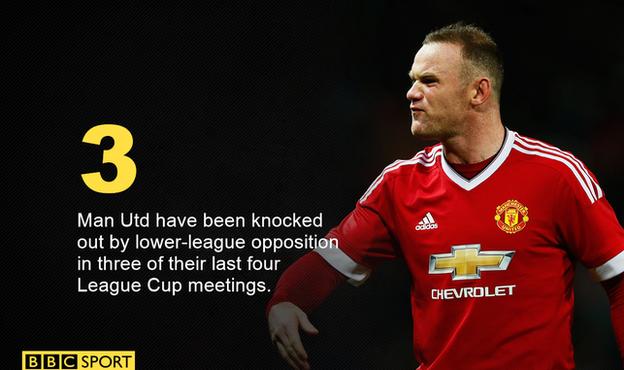 Middlesbrough boss Aitor Karanka said: "I told my players after the game that we were better than them - we were more confident on the pitch, we were fitter than them.

"I have to say how proud I am of my players. Penalties sometimes you lose - last season we lost against Liverpool after 30 penalties - and sometimes you can win like today.

Boro will play Everton at home in the last eight, with the ties to be played in the week commencing 30 November.