Villa are bottom of the Premier League following a 2-1 defeat by Swansea - the club's sixth straight league loss - and Sunderland's first win of the season.

The club said in a statement: "The board believes the results on the pitch were simply not good enough and that a change is imperative."

Ex-Everton and Manchester United manager David Moyes is among those in the frame to replace Sherwood, 46.

Former Lyon manager Remi Garde, 49, has also been linked with the job, with French TV station Canal Plus - who employ him as a pundit - reporting he is in advanced talks with Villa.

Under-21 manager Kevin MacDonald has been placed in interim charge.

The club are expected to speak to a number of potential replacements, and an announcement may not be made until after next week.

Appointed in February to replace Paul Lambert, Sherwood reached the FA Cup final and led the club to a 17th-placed finish in his first season in charge, but has won one of ten league matches this term.

Villa have not won since the opening day and are four points from safety. 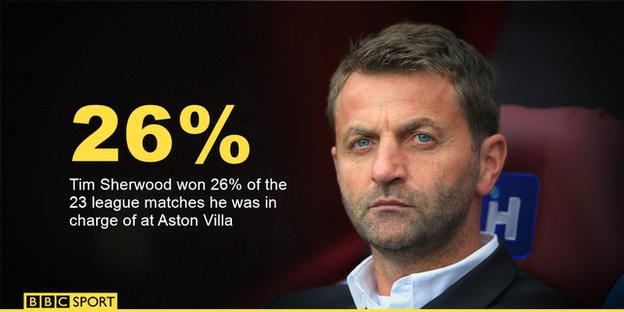 Sherwood has overseen just 28 games in all competitions - the shortest spell of any permanent Villa manager.

The club's statement offered Sherwood "sincere thanks for all his efforts during a difficult period last season and for the many positive contributions he has made to the entire football set-up".

After the defeat to Swansea, Sherwood evaded questions about his future, saying when asked whether he would be in the job next week that he was "not the person to ask". He added: "I feel like the club is in a hole. At the moment we are short."

Villa's next game is against Southampton in the League Cup on Wednesday.

The former Spurs midfielder was appointed at White Hart Lane in December 2013, but was dismissed in May 2014 despite the club finishing sixth in the Premier League.

Former Liverpool and Fulham midfielder Danny Murphy on MOTD2 Extra: "He did well keeping them up [last season] at a time when they were in trouble. He played to [former striker] Christian Benteke's strengths and got them to the FA Cup final. He deserves credit for that.

"We don't know exactly what's gone on with the recruitment of the players that have come in - ultimately too many of them haven't done well enough and are not good enough. Like all managers, he's responsible for that.

"I would feel as a Villa fan, if they could get Brendan Rodgers that would be a brilliant appointment."

Former Blackburn and Wigan striker Jason Roberts: "Villa Park is a tough place for the home side. Visiting managers say keep the crowd quiet for the first 20 minutes and they will turn. That has not just been the case for Tim Sherwood, but any manager. Who can realistically come in and turn it round? But when you go there it's a big club."