Manchester United and Manchester City played out a dull deadlock in their derby at Old Trafford.

City returned to the top of the Premier League ahead of Arsenal on goal difference - but there was little else to celebrate in a dire game devoid of attacking quality.

What few chances there were fell to United. Substitute Jesse Lingard hit the bar late on and City keeper Joe Hart saved well from Chris Smalling.

United defender Marcos Rojo and City's Nicolas Otamendi were both outstanding as Old Trafford's atmosphere was muted long before the final whistle. 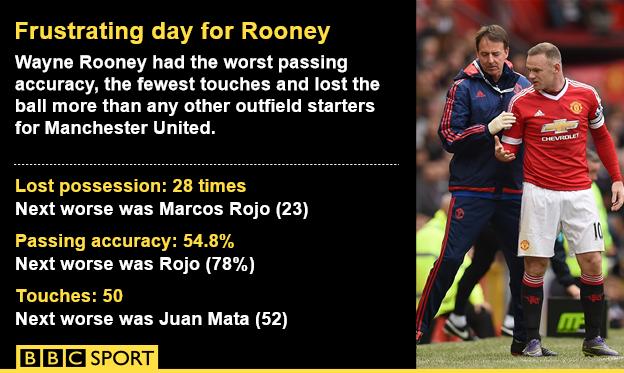 Wayne Rooney celebrated his 30th birthday on Saturday, but did not produce a performance to get the home supporters in the party mood.

It was not for want of trying as Rooney tirelessly tried to exert influence on a game where both sides cancelled each other out for long periods.

His performance prompted more post-match questions from the media, which United boss Louis van Gaal said he was "sick" of answering.

There is no doubt, however, that some of the old snap and spark is currently missing, ending in Rooney treading the familiar territory of a player almost trying too hard to make things happen.

Rooney having a head wound stapled on the touchline was arguably the most eye-catching moment of a dreadful first half, where his struggles were underlined with one wayward pass that ended a promising United move.

And there were howls of frustration from United's fans after the break when he decided against trying to pick out an option further forward, turning to pass back.

Rooney has had such fallow spells before and has invariably ended them in spectacular style so only a fool would write him off - but this was not his best day.

Manchester City spent in excess of £100m on Raheem Sterling from Liverpool and Kevin de Bruyne from Wolfsburg to add extra potency to their attack.

The £55m Belgian De Bruyne and Sterling, who cost £49m, have both sparkled since the start of the season but failed to flourish in their first Manchester derby, with the latter only lasting 55 minutes before he was replaced by Jesus Navas.

Sterling's main contribution was to almost give away a very soft penalty when he tangled with United's Ander Herrera in the second half. He wore the look of a very relieved man when referee Mark Clattenburg ignored the appeals of Old Trafford.

De Bruyne saw more of the ball, especially on the right flank before he was switched to the left in the second half. However, his delivery was uncharacteristically poor.

There is plenty more to come from both of these fine young players but, like so much else on offer at Old Trafford, they were unable to rise above the general mediocrity.

The empty seats and relative silence around Old Trafford in the closing moments illustrated just how poor this 170th Manchester derby was.

It took 82 minutes for a shot on target, or an apology of one - a Navas effort that rolled through to United keeper David de Gea.

Smalling brought that good save out of Hart late on but this was one of the worst derbies in recent memory.

City have had spectacular wins such as the 6-1 thrashing of United here in October 2011, and they were arguably even more convincing in a 3-0 win over David Moyes' team in March 2014.

Van Gaal's United were outstanding in a 4-2 derby win at Old Trafford last April. All of those were games contained the elements of excitement this bore draw did not.

Lacking attacking ambition and cutting edge, both sides cancelled each other out for long periods in a game that will have been forgotten by most fans as soon as the final whistle blew.

Powerful in the air and on the ground, the £32m summer signing from Valencia was a reassuring presence alongside returning captain Vincent Kompany, justifying Manuel Pellegrini's decision to pick him ahead of Eliaquim Mangala.

'Not an attractive game' - managers react

Manchester City boss Manuel Pellegrini: "We are back at the top of the table.

"It was a very tactical game. I prefer to play in another way but we defended well.

"Unfortunately for the fans it was not a very attractive game. We are two creative teams but we could not do it today."

Manchester United manager Louis van Gaal: "We had 90 minutes control of the game against a side like Manchester City. I cannot complain. But you want to win and we did not.

"We should have had a penalty on Ander Herrera. It is easy to see for me but I have a replay. The referee has one second.

"I always say we need the modern technology but I am the only one in the desert calling for it."

Both sides are in League Cup fourth-round action on Wednesday - United are at home to Middlesbrough and City host Crystal Palace.

On Saturday in the Premier League United go to Palace, while City host Norwich.