Ex-QPR boss Neil Warnock has returned to the club as a first team advisor.

The 66-year-old, who took charge of Rangers from March 2010 to January 2012, will take on a part-time role helping manager Chris Ramsey.

Warnock's last job was at Crystal Palace, where he was sacked last December after four months in charge.

"Full-time management doesn't interest me any more, but if I can help Chris and QPR by acting as a sounding board, then that's great," Warnock said.

"I've often been quoted as saying there's a gap in the structure of a football club for someone to come in to be a sounding board and offer advice, and I'm delighted Chris has shown his faith in me in this role. 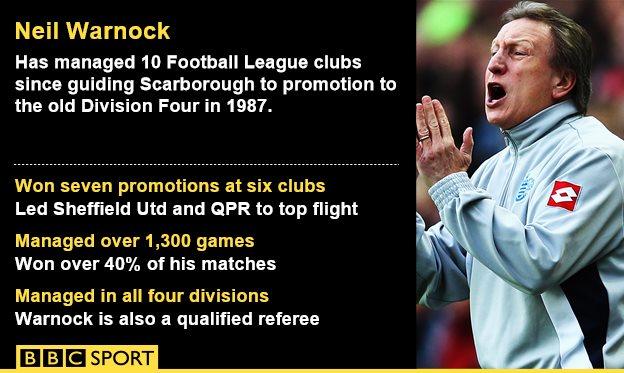 "I'm really looking forward to working with him, he is someone I've always admired as a coach.

"When I look at the solid start to the season QPR have made, coupled with the squad we've got at our disposal, I think there's a real opportunity to climb the table and push on," added Warnock.

Under Warnock's leadership QPR were promoted to the Premier League in 2011 after winning the Championship, but he was sacked the following January with the club in 17th place in the table.

"Neil has a passion for this club and for football in general, and he's got too much to offer for us to waste an opportunity to tap into his knowledge," Ramsey said.

"Adding someone to the backroom team has been on my mind for some time and I know Neil well, having spoken to him at length during his time at Crystal Palace when we were in talks about me going to join him as part of his staff.

"To get him in at this stage of the season, when the games come thick and fast, is perfect timing for us and a fantastic opportunity for us to take advantage of his unparalleled Championship experience," added the Rangers boss.

Warnock will work under director of football Les Ferdinand and will begin his role on Sunday, following the club's Championship trip to Birmingham City on Saturday.