The cost of watching football in the UK has dropped or remained the same for the majority of fans, a study by the BBC has found.

The Price of Football, the largest study of its type in Europe, looked at costs at 227 clubs in 13 UK leagues.

Click here to play with the Price of Football calculator and see what your support is costing you.

Inflation, as measured by the Consumer Price Index, was -0.1% in September and has been almost flat since hitting a then-record low of 0.3% in January.

The Price of Football surveys the cost of the cheapest and most expensive match-day and season tickets, as well as the cost of a pie, programme, cup of tea and replica shirt.

Now in its fifth year, the study found: 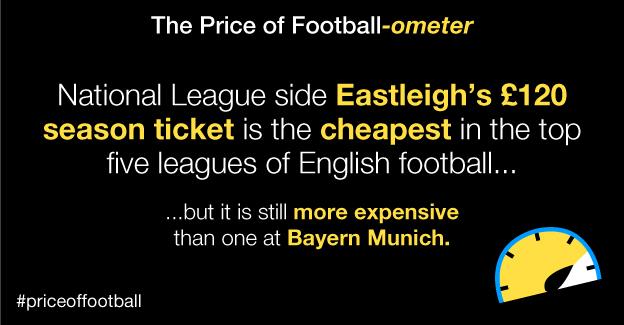 What are clubs charging?

Arsenal again have the most expensive match-day ticket in the Premier League at £97.

The cheapest match-day ticket in the Premier League is offered by Leicester City at £22.

At £52, Chelsea's cheapest match-day ticket is the highest priced of the Premier League's least expensive.

Derby County, Reading and Huddersfield's £10 match-day ticket is the cheapest in the top five leagues in England.

Stoke City have the cheapest season ticket in the Premier League at £294.

Reading's £135 season ticket is the cheapest in the top four divisions in England - although this is for 18-24-year-old supporters only. League One Bradford City's £149 is the cheapest available to all supporters. National League side Eastleigh charges £120.

The most expensive season ticket in Scotland is sold by Celtic, at £559, but that fell in price by £41 this season.

In the Women's Super League One and Two, Manchester City have the most expensive season ticket at £48, while London Bees Ladies have the cheapest at £18.

Manchester United's £60 adult shirt is the most expensive in the study, while the cost of their junior shirt, at £45, is also the highest priced. It costs £118 for a full adult strip, including shorts, socks and a name and number at the Old Trafford club. A full junior strip is £103.

The cheapest adult shirt in the UK is at London Bees Ladies, who charge £20.90.

What about food and drink?

Scottish League Two side Elgin City sell both the cheapest tea (60p) and cheapest pie (£1) in the study. 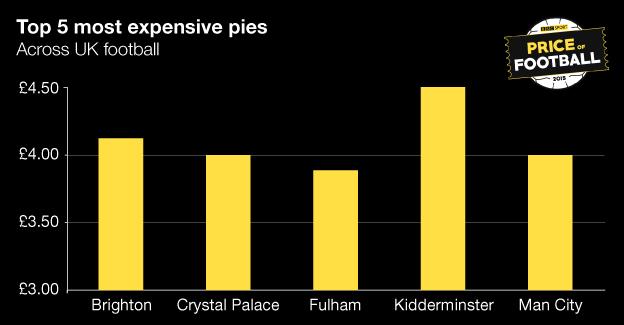 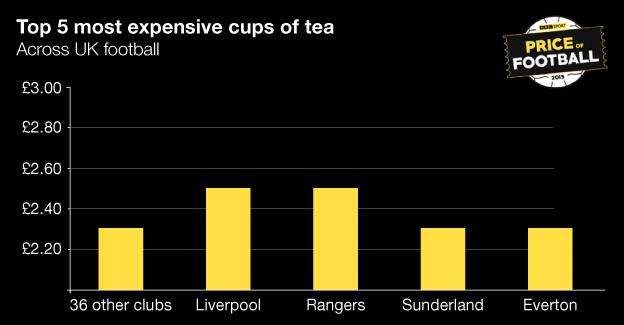 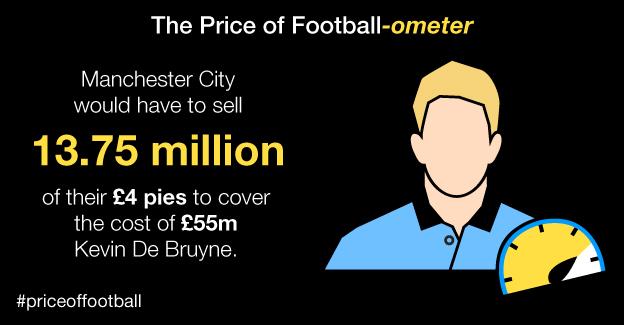 What about the European teams in the study?

You can buy a season ticket at Bayern Munich for £104.48, less than the cheapest available in the top four leagues in both England and Scotland. 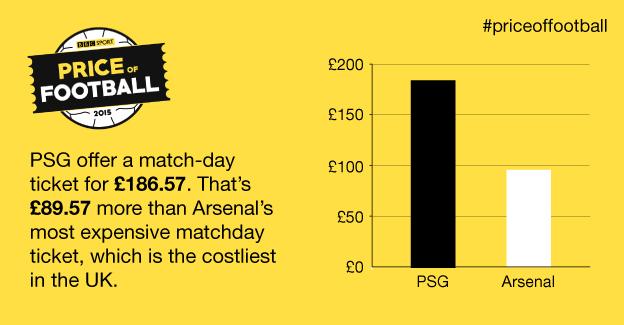 The reaction of the leagues

The Premier League: "Clubs are working hard to keep grounds as full as possible, with the past two seasons showing they are doing a good job with record occupancy at 96%. This is borne out by the BBC's research that shows 70% of tickets available are either the same price or cheaper than last season.

"However the BBC's focus on single match tickets is misleading as the vast majority - two-thirds - of Premier League match attenders are season-ticket holders. The raft of away supporter offers has seen travelling attendance go up by 6%."

"The significant numbers of season ticket holders at matches, along with ever greater numbers of young fans, has resulted in the average price paid per paying spectator being as low as £14 across the League's 72 clubs.

"Clearly others, such as adults and those paying on the day, will usually pay more. Clubs therefore need to ensure that their ticketing policies provide the right balance between fair value for supporters and generating the income that sustains on-field performance, which overwhelmingly they do."

Neil Doncaster, Scottish Professional Football League chief executive: "This year's BBC Price of Football survey backs the SPFL's view that our 42 member clubs continue to invest significant time, money and effort in making the game as affordable and attractive as possible to fans.

"With around 75% of tickets either frozen or falling year-on-year, this has helped the current season get off to a strong start with attendances showing a 4.3% increase so far when measured against the whole of last season."

Expensive or value for money?

Kevin Miles, Football Supporters' Federation chief executive: "It says a lot about modern football when it's hailed as unusually good news that ticket prices aren't rising even further. Last season, football was incredibly expensive, it remains expensive this season - particularly on match-day tickets, for away fans and young adults.

"Premier League clubs knew before they had even set their prices for this season that they would be due a substantial windfall from the new TV deal."

Robert Elstone, Everton chief executive: "I think there is a great danger when you look at price lists and what is the highest and lowest price. The reality is that doesn't affect pricing across the board in the stadium.

Tim Farron, leader of the Liberal Democrats: "For fans for whom it can cost up to £200 to take a family to the average match in many of the leagues in British football, it is welcome that more clubs have frozen prices.

"More clubs have put ticket prices up than have reduced them though and it is worth bearing in mind that as you get lower down the league the percentage of clubs who put prices up has actually risen."

Clive Efford, shadow sports minister: "Two or three clubs have reduced their prices, more have frozen. I commend them for that. But the basic price for fans has gone up by over 6% so the minimum price will be over £30 for the first time.

"Fans are being ripped off. How is that fair on football fans? The only thing they put on free on replica jerseys is the name of the sponsor who is paying for advertising.

"You have to pay extra for the Premier League logo, the name of players, numbers, and kids are being ripped off."