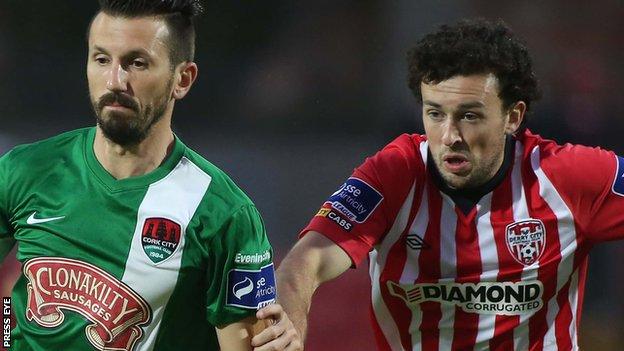 Derry City will travel to Turner's Cross on Monday night for an FAI Cup quarter-final replay after drawing 1-1 at home to second-placed Cork City.

The hosts were boosted by an early headed goal by returning skipper Ryan McBride who powerfully met Patrick McEleney's corner for the opener.

Derry held that lead until the 49th minute when Mark O'Sullivan followed up to net the Cork equaliser.

Peter Hutton's Candystripes will be massive underdogs for the rematch.

But, if they can play the way they did in the early stages of Friday's game at the Brandywell, they will be in with a shout.

In addition to the goal, they carved out a number of other chances against Cork who had already been Derry twice in the league this season.

Centre-back Darren Dennehy missed an early chance for Cork before Derry took the lead with their first goal in six meetings with the Munster men.

Patrick McEleney, who became a father earlier in the week, swung in the corner and defender McBride met it with a strong header.

Soon after the goal, an audacious long-range effort by 22-year-old McEleney had the Cork keeper Mark McNulty back-pedalling to tip the ball over the crossbar.

Derry's Stephen Dooley then sent a right-foot shot into the side-netting.

The Candystripes maintained their slender advantage until early in the second half when O'Sullivan kept up his record of scoring in every round after a quick break up field by the visitors.

The 32-year-old forward followed up to score after home keeper Gerard Doherty had saved the initial shot from Karl Sheppard.

McEleney almost grabbed a late winner for Derry but keeper McNulty beat the ball away.

In Friday night's other quarter-finals, Bray Wanderers, Longford Town and Dundalk progressed to the last four.