Croatia have sacked coach Niko Kovac after a 2-0 defeat by Norway left their chances of qualifying automatically for Euro 2016 in the balance.

Croatia are third in Group H with two matches remaining, but are just a point behind second-placed Norway.

The top two qualify automatically while the team in third are guaranteed at least a place in the play-offs.

Kovac, 43, had a public falling-out with Real Madrid midfielder Luka Modric after the loss to Norway.

Modric, who was unhappy to be substituted during Thursday's 0-0 draw with Azerbaijan, angrily dismissed Kovac's claim the players were not "dedicating themselves sufficiently". 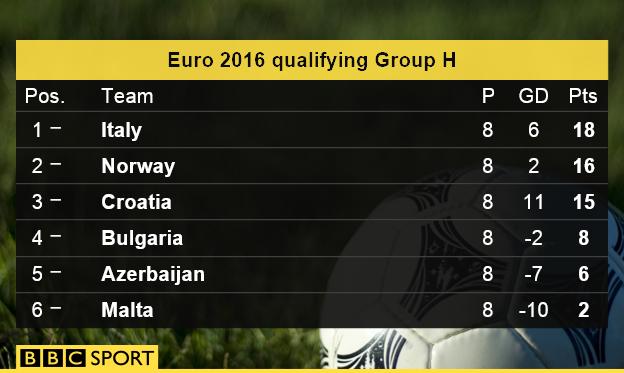 Kovac, who was appointed in 2013, took Croatia to last year's World Cup in Brazil, where they failed to progress from a group containing the hosts.

With games against Bulgaria and Malta to come, they have secured at least a place in the play-offs to qualify for Euro 2016 in France.

Davor Suker, the head of the Croatian Football Federation, said Kovac's successor will be chosen at a meeting on 21 September.