Iceland sealed their place at a major tournament for the first time as they secured the point they needed in their Euro 2016 qualifier against Kazakhstan.

Iceland and Czech Republic both progress from Group A, with Netherlands now unable to advance automatically.

Cardiff's Aron Gunnarsson, the Iceland captain, who was dismissed late on, said: "It's unbelievable, I'm shocked."

The island nation is the smallest to qualify for a Euros, with an estimated population of just 317,000.

Before the match, manager Lars Lagerback said qualifying would mean more than reaching eight successive finals with his native Sweden, who he managed for nine years.

Iceland have moved up 100 places in the Fifa rankings since Lagerback took charge in 2011 and now sit in 23rd position, above the likes of France, Ukraine and Russia. 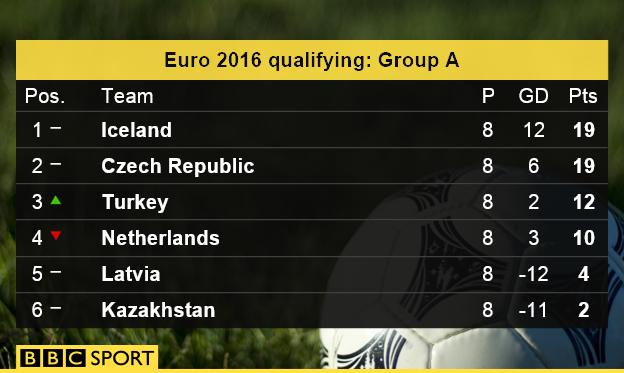