I loved working with this Wales team for over a year as Chris Coleman's assistant and I know just how tight-knit they are as a group.

Many of them are a similar age, and have been playing together at international level for a long time now.

Former Wales manager John Toshack deserves a lot of credit for that, after bringing them through a few years ago and giving them a lot of experience when they were young lads.

Quite a few people, including myself, probably did not appreciate that much at the time but that policy is coming to fruition now.

As well as a real togetherness, there is quality, depth and balance to Coleman's squad.

Wales have done brilliantly to be on the brink of qualifying for Euro 2016, and this is why I am 100% confident they will see the job through.

Flexibility as well as firepower

Up front is a good example of how adaptable Wales have become. On paper, our strikers might look a weak link because it is the only area where we don't have a Premier League player.

At times during this campaign Wales have not even had an out-and-out number nine, but that has not been a problem during the last six matches.

Whoever has been leading the line has done a terrific job, and not necessarily by scoring goals themselves.

With Gareth Bale and Aaron Ramsey in the team, the striker's job is to work the opposition defence and do a lot of running to make space for those two to get forward.

I did something similar when Mark Hughes was Wales manager, when I played up front with Craig Bellamy and Ryan Giggs running off me.

The difference here is that while I could only play as a centre-forward, Hal Robson-Kanu can go out wide and allow other players to come through the middle.

It looks like Robson-Kanu will be fit to face Cyprus despite a groin injury but, even if he isn't, Sam Vokes or Simon Church will play a similar role to stretch Cyprus and Israel and create openings for the Wales midfield.

Defender James Chester has been another injury doubt this week, while we already knew midfielder Joe Allen would be missing.

They are both important players but it shows the strength of Coleman's squad that, if needed, two more Premier League players in James Collins and Andy King can come in.

Ashley Williams is a rock, and a superb captain, and I love seeing Joe Ledley sitting in front of the back four. It all means that, as well as carrying a threat going forward, defensively Wales always look really solid too.

Wales have had world class players like Bale and Ramsey before, of course, but I don't think we have had an entire group with such quality in my lifetime.

They all seem to be pushing each other on and I am really confident they will make it to France. 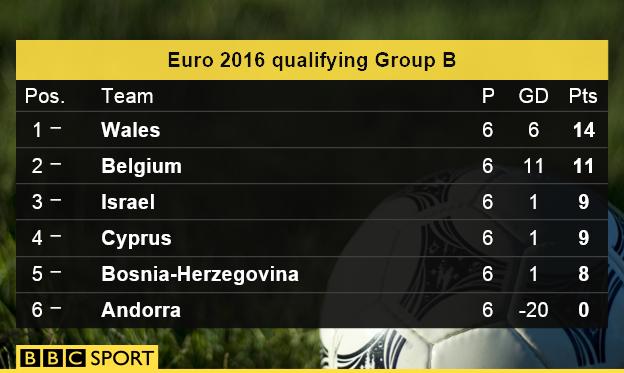 This team should be around for a few years yet, too. Only Williams and Collins are over 30, and most of the players are in their mid 20s - the average age of their latest squad is less than 26.

Because they got their chance early they already have plenty of experience, though. If you include Allen, six players in the current set-up have more than 40 caps and, in total, 15 players have 20 caps or more.

The knowhow they have already picked up is invaluable when they go to places like Cyprus.

Wise Wales can get result they need in Nicosia

Thursday's game might appear relatively straightforward compared to some of the other fixtures in Group B, but I know from personal experience that it will not be that easy.

Wales will have to adapt to the conditions because it will be extremely hot and the pitch will be hard and bobbly, a long way from the lush surfaces our players are used to.

They will have to be ready for it, because I know what can happen if they aren't. I made my final appearance in a Wales shirt in a 1-0 defeat by Cyprus in Limassol in November 2005.

Afterwards, Toshack said it was "the worst international performance" he had ever seen, and it was a miserable night for everyone involved.

Wales lost again in Cyprus in 2007, but this time I think the players will be too wise to let that happen.

I fancy them to win in Nicosia but I would be happy with a draw because four points in total from that game and Israel in Cardiff on Sunday would be good enough.

The nightmare situation is that Wales lose both of those matches, and are beaten by Bosnia-Herzegovina in October too.

I reckon three defeats in their next three games is the only way Wales will not make it to France, but I do not see it happening.

Chris has got them all focused and I know the players want to achieve something that some of the great Welsh players of the past could not do, which is to reach the finals of a major tournament. They won't slip up now.