Forward Ola Toivonen says he had no hesitation about joining Sunderland despite their current position at the bottom of the Premier League.

The Black Cats are without a win in their opening four league games this season and won only seven top-flight matches in 2014-15, scoring 31 goals.

Toivonen, 29, arrived on a season-long loan from Rennes in late August to link up with former PSV coach Dick Advocaat.

"There was nothing for me to hesitate about," the Swede told BBC Newcastle.

"Dick and other people spoke highly about the club, there are great facilities and the chance to play in the Premier League."

Sweden international Toivonen made his debut as a substitute in the 2-2 draw at Aston Villa, one of four summer arrivals in the squad.

He admitted he was short of fitness but is confident all of the new signings can find their sharpness. 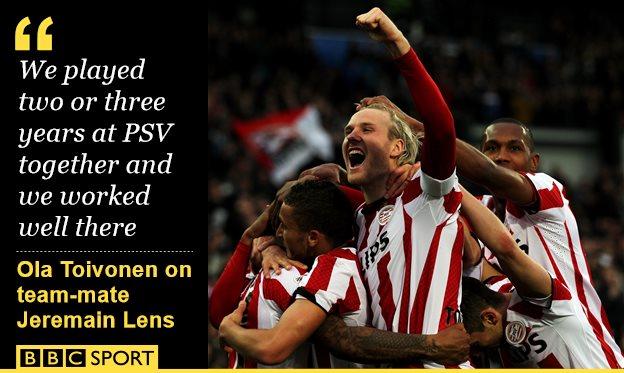 "If you look at the type of players we have it's only going to get better," Toivonen added.

"[Yann] M'Vila is a quality player, so he's going to get fitter and hasn't played for a long time, [Younes] Kaboul too and me.

"This international break is a good chance for the whole team to get fit."