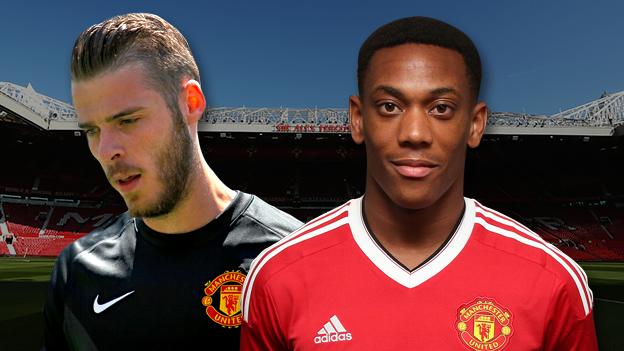 A goalkeeper going but then staying and the signing of the world's most expensive teenager. It has been a hectic 48 hours at Manchester United.

A late hitch saw David De Gea's move to Real Madrid fall through while largely unknown teenager Anthony Martial has made a £36m move from Monaco.

"De Gea was not happy at Van Gaal saying he did not want to play, something the keeper's camp rejected. That potential relationship breaker has been compounded by events of the past couple of days.

"Yet, in trying to sign Keylor Navas, Van Gaal was effectively telling Sergio Romero he was the number two pick. That leaves De Gea as first choice, unless there is a remarkable change in attitude towards former Barcelona keeper Victor Valdes."

"I had talks with a couple of clubs in July, meeting with a Premier League manager and then a Championship manager after that, had a couple of deals which looked likely and then fell through. That was hard enough for me to deal with, never mind someone of David De Gea's stature in terms of money involved and the level he's playing at.

"I coped by going on holiday with the family - whether De Gea gets that dispensation or not I don't know! But it will be very tough for him."

"That was the one position I thought looked a little shaky and De Gea has been the best player for Manchester United in the last two seasons. He will want to play because he has Euro 2016 coming up and he will want to be Spain's number one.

"It could be a blessing in disguise for Manchester United."

Will he leave next summer instead?

"With his contract due to expire in 2016 and his heart set on a return to Spain, United had already given up any hope of trying to persuade the 24-year-old to remain at Old Trafford beyond next summer.

"Prior to the past month, it wasn't that much of an issue then. De Gea is a world-class performer and is still on the contract he signed when he joined from Atletico in 2011. Two massive TV deals have been agreed by the Premier League since then, so United are effectively getting him on the cheap."

Where does Martial fit in?

Stone: "A flying forward similar to Thierry Henry, France coach Didier Deschamps says Martial starts in the middle and drifts out wide, mostly to the left but also on the right.

"Crucially, he also has electric pace, something Van Gaal felt was badly missing from his squad as he assessed their merits ahead of the new campaign. That would make him an ideal fit into one of the three spots Van Gaal likes to fill behind his main striker.

"However, even Cristiano Ronaldo was a frustrating performer for United at the age of 19, so consistency cannot be guaranteed."

Neville is assistant coach of Valencia and saw Martial first hand when the Spanish side beat them in the Champions League earlier this season.

He told Football Focus: "Of the two games against us, and video footage I witnessed of him, he is a top, top striker. He is quick, he is strong and likes to drift out to the left. Every time he got the ball I thought, no, get the ball away from him. He looks so dangerous and so direct.

"He is perfectly suited to the Premier League. I think it is a very good signing. It is a lot of money. Everybody in Spain can't believe the amount spent in England, they can't stop laughing at the fees we pay."

What happens if Rooney gets injured?

Stone: "Few took Van Gaal too literally when he described Marouane Fellaini as a potential number nine ahead of the Champions League qualifier in Brugge last month. Now it may be worth revisiting those words as they might be the reality.

"Even if he stays fit, it is unrealistic to expect the captain Wayne Rooney to play in every game across four competitions.

"Brazilian Andreas Pereira is an outstanding talent and scored in the Under-20 World Cup final this summer, but he is no battering ram. James Wilson is bigger, yet there has been talk of the England Under-21 international going out on loan, albeit with an instant escape clause.

"Memphis Depay could be an option, but playing as an out and out striker is not something he has previously had to do."

Ex-Liverpool midfielder Murphy: "Fellaini as a striker. He can play that role well, he did it for Everton. That is one option. Martial might be able to play through the middle, stretch people with his pace a bit like Theo Walcott.

"I was surprised Javier Hernandez was sold, he is a proper number nine for me and it was an option. Wilson is another possibility and Manchester United might think he is ready to play more games.

"If you keep signing players you don't give the young players chance to develop. You need to give confidence to the young players and maybe the Wilson situation is the one that we will be surprised by and he might be involved more.

"However, with Van Gaal it is very hard to predict."

Former Arsenal defender Keown: "There is a lot of money coming into the game and you have to use it in the right way and you have to question Manchester United now - without another striker and Rooney not scoring goals.

"There is a lot of pressure on Manchester United. The days of Sir Alex Ferguson and David Gill have gone - the way Manchester United conducted themselves and did all their business really early. They always had power players, four strikers and now they only really have one striker. It is really surprising."

How has Louis Van Gaal's reputation been affected?

Stone: "Van Gaal has made being blunt an art form. His inability to grasp the nuances of the English language mean he often speaks in more brutal terms than is always wise.

"The strategy doesn't matter when he deals with the media but within a dressing room it can be destabilising. Did his treatment of Victor Valdes have an impact on former Barcelona team-mate Pedro's decision to join Chelsea for instance?"

Murphy: "The goalkeeper situation won't reflect badly on him. Deals like this do drag out for lots of reasons.

"I still think United will have a decent season, but I don't think they will win the title. A manager is ultimately judged on how they do over the season. Sir Alex Ferguson sold fans' favourites but when you are winning it gets forgotten."

Stone: "Had United been able to lure a marquee signing, they surely would have done, but Gareth Bale, Cristiano Ronaldo, Neymar and Thomas Muller were unobtainable.

"Louis van Gaal spent three weeks pondering whether to trigger Pedro's £24m buy-out clause at Barcelona. Ultimately though, he decided not to bother. The main reason? Doubts about Pedro's pace, the area Van Gaal felt his attack was most deficient in.

"Ultimately, United signed six players, it would have been seven if Keylor Navas had come in, which is quite a lot."

Keown: "It looks from afar that their transfer strategy is not very scientific. It is almost like there is a poker game being played. They are gambling on players they paid a fortune for. Angel Di Maria came in last summer and it didn't work, they lost something like £20m on that deal.

"If you look across at their noisy neighbours, Manchester City, they seem to have done all their business calmly and quietly. OK they have spent a fortune, and they can afford to do so, but they look in really good shape for the start of the season."

What does it say about Ed Woodward?

Stone: "Compared to predecessor David Gill, Woodward is still relatively new in the job. This was the 43-year-old's third summer transfer window and he has previously said he would be crazy to say he enjoyed them.

"Yet prior to the last couple of weeks, he did well.

"But the bullish stance on De Gea - United made it known they only wanted Keylor Navas in exchange or a world record fee - was undermined by Van Gaal's treatment of the player.

"And, whether real or perceived, there was an element of desperation about United's activity in the final week, when they were linked with both Neymar and Charlie Austin."

Murphy: "He has taken a lot of the blame, but it is very difficult to judge from the outside. Deals can fall through for various reasons. Is it his fault that Pedro did not go to United? Was it a call from Jose Mourinho? We don't know the answer.

"If you compare United now with the United of old they seemed to get the players they wanted, but that could be based on other clubs now having caught up with facilities and stadiums and money.

"It is hard to say it his fault because transfers are so complicated now. There are agents involved, chief executives, managers - so many different people and factors."

Keown: "Van Gaal came in with ultimate experience. He is the experienced man of that pair. Did he want to keep De Gea? Who else will play now? It is a real mess they have created."

How's the defence shaping up?

Stone: "Despite widespread reservations among the wider media, Van Gaal made an early call on his defensive options.

"Had Navas arrived from Real Madrid as part of a deal that included De Gea, he would have been welcomed. Other than that, United were not interested.

"Eyebrows were raised when it was suggested 5ft 11in Daley Blind would feature in central defence. But he has. Chris Smalling's early-season performances have been excellent. Matteo Darmian has impressed, as has Luke Shaw.

"What problems do exists for Van Gaal on 2 September, they do not appear to be at the back."

What do the fans say?

Stone: "One thing guaranteed to irritate Van Gaal is to put a question to him on behalf of 'the fans' as he hates such generic terms. Nevertheless, there is unease - even amongst more reasoned observers - at a crazy couple of days."

Sean Bones, vice-chairman of Shareholders United: "It has been quite bizarre. I have never seen anything like it. We are all scratching our heads wondering what is going on.

"The business at the start of the window was very good but we have not kicked on.

"We have three problems. Goalkeeper, centre-half and centre-forward. That is the spine of the team. We are stronger than we were at this point last year but we wanted to compete for the title and I think we are a little bit short of that."

Dale O'Donnell, editor and founder of StrettyNews.com: "Considering the big-name arrivals this summer, a quick look at the current Manchester United squad will show an improvement in one, if not two departments.

"The main area for concern is the lack of depth up front with a lot expected of new signing Anthony Martial, 19, given the astronomical fee paid to Monaco.

"David De Gea will return to Manchester needing to repair his relationship with Louis van Gaal and goalkeeping coach Frans Hoek. For the club's sake this is essential as none of the goalkeepers available for selection are in the same league."

Stone: "Most United players - including De Gea - are now on one sort of international duty or other.

"When they come back, they immediately face a Premier League encounter with old rivals Liverpool at Old Trafford on 12 September. After that it is a trip to PSV Eindhoven, top seeds in their Champions League group, followed by a visit to Southampton.

"Interestingly, on 13 September, United have an Under-21 game against Chelsea. Given he is unlikely to play for Spain in their forthcoming Euro 2016 qualifiers, what are the odds on De Gea's return to action coming at Aldershot's Recreation Ground?"