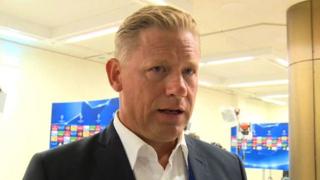 The 24-year-old Spain international keeper has been left out of manager Louis van Gaal's squads so far this season after long-running speculation that he could moving to Real Madrid.

Schmeichel, who made 398 appearances for the Old Trafford club, says "as a fan" he wants to know if De Gea is "with us or somewhere else". The Dane also says that United need to sign another striker but that he is glad that Pedro did not join the club.