Birmingham City boss David Parker has called it a "doomsday scenario" and Bristol Academy manager Willie Kirk says the Vixens are determined to take the relegation fight to the final day.

Just two points separate the pair at the bottom of Women's Super League One with three games remaining, while Liverpool need just one point to guarantee safety.

Two sides that have competed in the Champions League twice in the past four years now face the prospect of the drop.

"If you go down it is not the end of the line but it is an absolute disaster to get relegated from this league," Parker told BBC Sport following Sunday's 1-1 home draw against Sunderland.

"Getting relegated from WSL 1 is a doomsday scenario - it is funding, players, everything. You see the way Everton went down, losing a couple of players and now you can see how hard it is to get out."

Bristol Academy, who beat Barcelona to reach the quarter-finals of Europe's top club competition this year, are rock bottom - a spot they have occupied all season.

Birmingham, with almost the same line-up that reached the semi-finals of the Champions League and came within a goal of the title last season, are away from home for their final three matches - starting with next week's trip to Bristol. 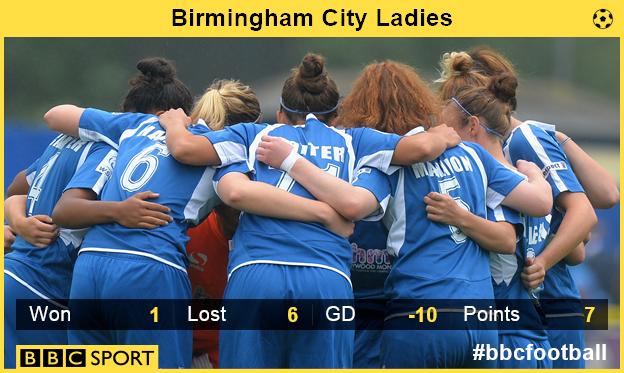 Only one win each

Birmingham City seemed to have brought Liverpool into the relegation scrap when they claimed their first and only league win to date against the Reds earlier this month.

However, two goals from Natasha Dowie was enough for Liverpool to overcome a Bristol side that revived their own hopes of avoiding the drop after claiming their first win of the league season by beating Women's FA Cup finalists Notts County.

"It was a two-horse race until Birmingham beat Liverpool and we beat Notts and it almost dragged them into it," Kirk told BBC Sport after Saturday's 2-0 defeat. 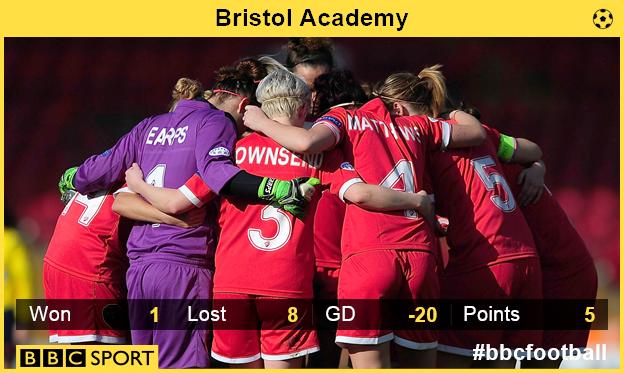 Blues travel to Bristol's Stoke Gifford Stadium next week for what is shaping up to be the most definitive night in their relegation battle.

Birmingham have enjoyed FA Cup glory and sampled European success, but Parker believes their trip down the M5 will be a defining moment.

"It is one of the biggest games in this club's history, we don't need to build it up any more than that," he said.

Kirk's message to his players ahead of Birmingham's visit is to ensure they take the fight all the way.

"I think it will go do to the last day of the season, but we have a lot of work to do between now and then to make sure we are still in it with a game to go," said the Scotsman.

Parker says the fitness of England internationals Karen Carney and Jade Moore is being assessed game by game.

"If it is just a matter of playing game by game, then that is what we have to do at this moment in time because we are in a dogfight."

Kirk, who replaced Dave Edmondson in June and rejuvenated the squad with seven transfer deadline day signings, insists the Vixens have responded to their relegation plight.

"It is easy to coach that lot, because they have been great since the day I came," he said.

"We are not far away, but that is not going to save us from relegation - we need results."