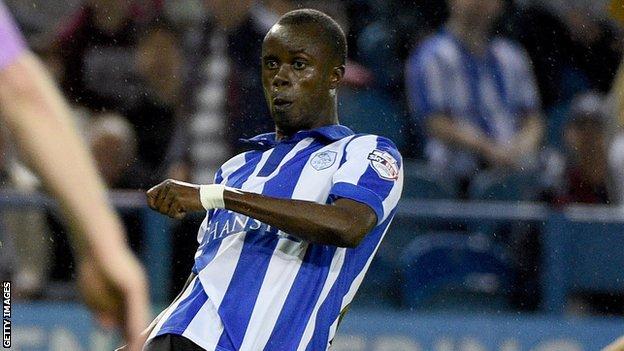 Senegal's Modou Sougou says he was right to move from French giants Marseille after scoring two goals in three appearances for Championship side Sheffield Wednesday.

The 30-year-old signed a two-year deal at Hillsborough after leaving Marseille by mutual consent three weeks ago.

He scored on his debut in the League Cup win over Mansfield Town.

"I'm 30 and the opportunity to play in England doesn't knock on your door very often," Sougou told BBC Sport.

"Sheffield Wednesday presented me with a great chance to come [to get regular football], and I'm settling in well and really enjoying it.

"Just three weeks here and I found the Championship standard impressive and the tempo incredible."

The highly experienced Sougou, who can play on either wing, has been in European football since 2004 with spells in Portugal and Romania before joining French side Marseille in January 2013.

He scored once in 16 appearances for the 1993 European Champions before switching to top flight rivals Evian on loan in the summer of 2013 in a quest for regular football.

Seven goals and 10 assists for Evian attracted interest from Sheffield Wednesday and Sougou is enjoying life at his new club even if he is playing in the second tier of English football.

"I like the Championship because all the games are open and all the teams want to win," he added.

"The intensity is good for the teams and the players, and this reality is why I came to Sheffield.

"Personally to play in England is one big privilege and I am very lucky to be here.

After playing around Europe and in the Uefa Champions League and Europa League Sougou admits he has had to quickly dispel any preconceived notions of the English game.

"I have been surprised by the quality of the football and the spirit of the game," said Sougou.

"In France they say the Premier League and Championship is all about 'kick and rush football' but that is a wrong notion.

"I still need to keep working hard because I spent the first half of my pre-season at Marseille so I am a little bit behind.

"Everyone's been really welcoming here and I look forward to helping this club achieve the set goals."

Sogou, who made his debut for Senegal at the 2008 Africa Cup of Nations in Ghana, has scored once in 14 appearances for his country.

He has been overlooked by national selectors since the Teranga Lions lost the 2014 World Cup play-off to Ivory Coast in October 2013.