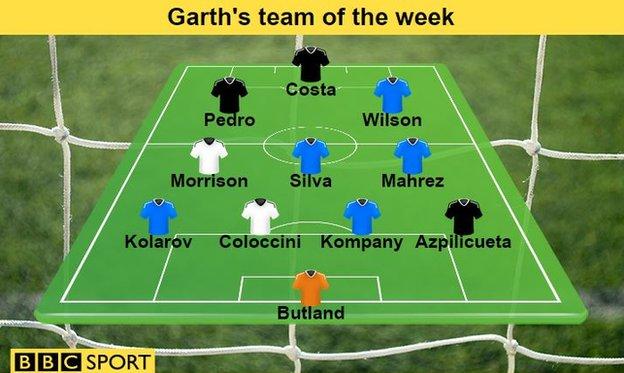 Manchester City's storming start to the season continued as they beat Everton to maintain their 100% record to go top of the Premier League.

Reigning champions Chelsea achieved their first league victory of the campaign after overcoming West Brom, Bournemouth beat West Ham in a thriller and Crystal Palace were also winners as they saw off Aston Villa.

Manchester United dropped their first points of the campaign as they were held by Newcastle and Leicester City continued the club's fine start to the season with a draw against Tottenham.

Sunderland got off the mark following a draw with Swansea, with Norwich impressing against Stoke but drawing and Watford and Southampton playing out a goalless encounter.

Do you agree with my selections?

Saves from Graham Dorrans, Nathan Redmond and Cameron Jerome was enough to give Jack Butland the nod over Sunderland's Costel Pantilimon in my team of the week but only just. Butland was brilliant for Stoke and the only reason that the Potters left Carrow Road with a point.

Manager Mark Hughes has invested in some big-name players at Stoke this season but the most important player on his books this season might be the emergence of Butland.

Azpilicueta's movement off the left flank into the box, while the ball was still in flight, to get the knock-down from Diego Costa and score was nothing short of brilliant.

Apart from anything else, the full-back displayed the natural instincts of a striker and got his rewards after a deft touch to put the game out of West Brom's reach. Impressive.

This lad probably took the brunt of the criticisms levelled at Manchester City's failure to retain the title. If that is true then he should be given the plaudits for a magnificent start to the club's bid to regain the title this season. Their captain and 'rock' looks back to his best.

He has already scored two goals this season, which illustrates his threat in the opposition's box, but his clearance off the line in the win against Everton when Joe Hart was clearly beaten when only 1-0 up was the turning point in the game.

By the time manager Louis van Gaal had decided to dispense with the idea of Manchester United playing sideways (a feature that is killing Wayne Rooney), Fabricio Coloccini and his troops had well and truly bolted Newcastle's gates.

The Argentine's ability to organise his defence, even after Manchester United finally understood that playing forward wasn't a criminal offence, was very impressive.

One of the many decisions the newly installed manager Steve McClaren has made since his arrival at St James' Park is to retain the services of Coloccini. Probably not his most difficult decision but certainly one of his best.

They are only three games into the new season and Raheem Sterling and Aleksandar Kolarov look imperious down Manchester City's left-hand side. It was the new dynamic duo whose consistent raids down Everton's right that eventually produced City's winner.

Any opponent that has any ambitions of beating Manchester City this season are going to have to contend with these two first.

Four goals in three games in the toughest league in the world says all you need to know about the development of this player. Riyad Mahrez was absolutely electric against a Tottenham side (in desperate need of another striker to accompany Harry Kane) who never came to terms with the movement and enthusiasm of the Algerian.

Mahrez hit the post with his right foot and scored a superb goal with his left. Between Jamie Vardy and Mahrez, Leicester are looking a force, particularly at the King Power Stadium.

In a season where it is so hard to predict a title winner, Manchester City have put themselves in with a great chance of regaining the title, largely because of the early season form of David Silva.

He ran the show from start to finish against a very dangerous Everton. Three games, nine points, eight goals and no goals against sends a message to the rest of the Premier League that City and Silva are back in business.

The game could not have started any worse for James Morrison. The Albion midfielder insisted he took the penalty he subsequently missed as early as the 14th minute in the defeat by Chelsea and I thought the game was going to be incredibly difficult for the Scot after that.

However, I couldn't have been further from the truth. Morrison demonstrated tremendous strength of character and scored two goals against a business-like Chelsea and should have had a hat-trick. A player with a lot of bottle.

Callum Wilson may have scored 20 goals for Bournemouth in the Championship last season but none of them will compare with the three he scored against West Ham in the Premier League. I must stress that West Ham were shocking in defence but that didn't seem to detract from the quality of Wilson's hat-trick.

I saw a very different Bournemouth against Aston Villa on the opening day of the season where they looked nervous and out of their depth. However, this was a performance by a team who appear to have discovered their confidence and have a striker to prove it.

At last Diego Costa has got back to concentrating on scoring goals, leading the Chelsea line and not wanting a ruck.

I have no objection to the striker battling centre-backs and making a general nuisance of himself providing it doesn't detract from what he does best, and that is playing with his back to goal, playing people in and getting among the goals. Against West Brom he did all that and more. Nice to have you back Diego.

What a wonderful debut by Pedro. The Spaniard scored a goal created by his own endeavour and then set up Chelsea's second at West Brom - and all within 45 minutes.

What I really enjoyed about this performance was the player never looked rushed or too eager to prove his obvious quality. He seemed to give Chelsea another dimension with the ball and width and depth without it. I think this signing is a title game changer for Chelsea.