Raheem Sterling's first goal for Manchester City ended Watford's resistance and helped his side continue their 100% winning start to the season.

The Hornets dug in well for the first half but the game changed 88 seconds after the interval when Sterling slotted home Bacary Sagna's cross.

Fernandinho made it 2-0 with a fierce finish from David Silva's pass.

Watford did not manage a single shot on target as City saw out the win to move three points clear at the top.

The victory was City's 10th in a row, breaking a 103-year-old club record, and they are still to concede a goal in any of their four Premier League games this season.

Watford, who had arrived at Etihad Stadium on the back of three straight draws, looked well organised as they frustrated the home side before the break but carried little threat when they tried to fight back after falling behind.

Reaction to this match and the rest of Saturday's action here

Hornets set out to stop City

Watford's gameplan worked superbly when the game was goalless, with City failing to find a way through the visitors in the first 45 minutes.

The Hornets did more than just work hard and defend in numbers, they kept City out thanks to some impressive organisation.

Troy Deeney was nominally Watford's lone striker in their 4-2-3-1 formation but actually operated as a deep-lying right-sided midfielder, helping to shield his defence when City left-back Aleksandar Kolarov made his frequent forays forward. 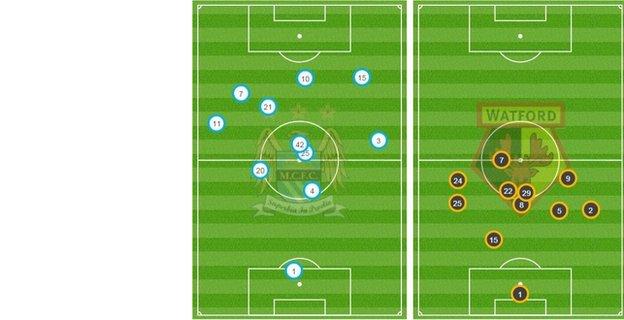 City essentially faced two banks of five defenders, and the speed on their flanks offered by Sterling and Jesus Navas could not make a difference.

Sterling had City's best chance of the first half when his was shot turned round the post by Heurelho Gomes, but that was the only time he got a clear sight of goal.

Last season, City boss Manuel Pellegrini was accused of tactical inflexibility when his team struggled to break down down defensive-minded sides.

But his half-time switch made the difference on Saturday - and showed the greater depth now available in his squad.

Navas was taken off and Silva moved over to the right, with Samir Nasri coming on to play on the left and Sterling being pushed up through the middle.

Within seconds, the change had an effect. Silva fed Sagna, whose cross was converted by Sterling six yards out.

It was an ominous sign for City's title rivals and Pellegrini's attacking options will only increase if, as expected, Kevin de Bruyne completes his move from Wolfsburg before the transfer window closes on Tuesday.

The 24-year-old Belgium midfielder, who will cost more than £50m, is set to have a medical with City this weekend.

Manchester City manager Manuel Pellegrini: "It was not frustrating in the first half. You can't expect to win the game inside 45 minutes against a team who defends well. We made some changes and we created more chances and won the game."

On goalscorer Raheem Sterling: "Raheem played very well. It was good for him to score. He worked very hard and I'm sure he'll score more goals."

Watford manager Quique Sanchez Flores: "We were prepared for a difficult match and we were there to resist and contain City.

"They have some high quality technical and physical players so it is hard to do that here but we had the feeling in the first half they had a lot of problems, we defended well and restricted the space very well.

"It was disappointing to concede the goal so early in the second half but the difference between us and City is high, and we gave our best. Losing here while fighting to play well is a positive thing for Watford."

City will return to action after the international break with an intriguing top-of-the-table trip to Crystal Palace, who are second after their shock win over defending champions Chelsea.

Watford will continue their hunt for a first win of the season when they host Swansea.