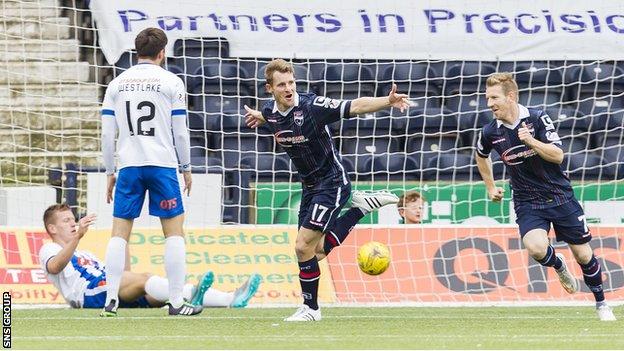 The hosts were atrocious in defence as an early deflected strike from Boyce sent the Staggies on their way.

Jonathan Franks knocked in a debut goal after a Craig Curran effort was blocked and Boyce added a tap-in.

Andy Davies shot in the fourth goal from a corner on 35 minutes to complete their biggest win over bottom-of-the-table Killie.

The Ayrshire side have not won at home since March and have picked up just one win from their last 14 matches.

Michael Gardyne then got to the left byline to cut the ball back for Curran to fire in a shot which was blocked on the line but Franks pounced to hammer in the rebound.

It was all County and MacDonald had to be alert to make good saves from Fraser and two from Curran to prevent them increasing their lead.

And MacDonald could do nothing to stop Boyce claiming his second of the day when he connected with a Jamie Reckord driven shot.

The fourth goal quickly followed with captain Davies volleying home a Michael Gardyne corner kick at the back post for his first goal for the Dingwall side.

Killie's only real effort of the first half came from Kris Boyd as his 20 yard free kick came back off the post.

Lee McCulloch's follow up was deflected over the bar and that was to be the player assistant coach's last involvement as he limped off to be replaced by Aaron Splaine.

Jackson Irvine was controlling the match in the middle of the park and the former Killie player almost made it five before the interval with an overhead kick which was tipped over by MacDonald.

Early in the second half, Davies could have added to the visitors' lead when he guided a free header over the bar, with the Kilmarnock defence nowhere to be seen.

As regularly happens when one side has a commanding lead by half time, the flow of goals dried up.

But for MacDonald's performance Killie could have been facing an even greater margin of defeat and the former Falkirk keeper produced another good save from County substitute Stewart Murdoch two minutes from the end.

Shots on Target
Home2
Away11