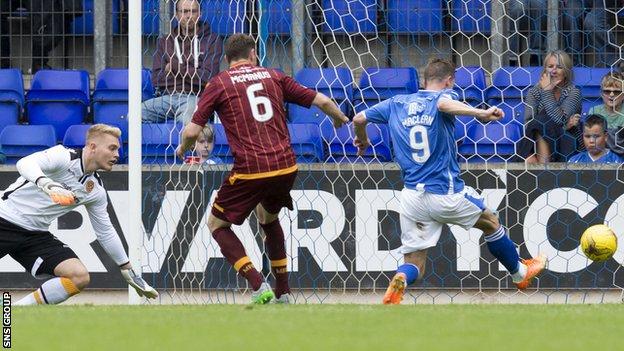 Steven MacLean scored twice as St Johnstone recovered from the loss of an early goal to record their first victory of the season.

The striker turned the ball in from close-range twice in the second half, helped by assists from David Wotherspoon and Michael O'Halloran.

Louis Moult had bundled Motherwell ahead on 11 minutes.

Jake Taylor picked up a late second booking for simulation as the visitors slumped to a fourth successive loss.

Motherwell are now without a point in five visits to McDiarmid Park.

Three points for St Johnstone lift Tommy Wright's side to seventh in the Premiership and although clean sheets evade Saints, there is no shortage of goals.

MacLean, formerly of clubs such as Rangers, Aberdeen and Sheffield Wednesday, has now already equalled his tally from last season of three strikes - he looked threatening for three quarters of the match.

It was the first quarter when Saints stalled a bit, with Lionel Ainsworth getting the better of Brian Easton down the right to square the ball low for his fellow Englishman Moult to open his account in the most straightforward of ways since joining from Wrexham.

Ainsworth and Scott McDonald then scorned chances to add to the visitors' lead.

MacLean had better luck from a few yards out after the break.

His first was set up by substitute Wotherspoon and converted into the middle of the goal, then O'Halloran wriggled free down the right to expertly provide another on a plate for him in a match watched by Scotland manager Gordon Strachan.

To complete a miserable day for Motherwell, Welsh midfielder Taylor, on loan from Reading, picked up a second yellow from referee Craig Thomson for going down too easily.