Sean Dyche's side, who were relegated from the Premier League last term, had taken only two points from their opening three Championship games.

Defender Keane nodded in a David Jones corner at the back post on 26 minutes to seal victory over the Bees.

Striker Andre Gray, who joined Burnley from Brentford for a reported £9m on Friday, was not involved at Turf Moor.

Brentford, whose midweek home game with Birmingham City was postponed to allow their Griffin Park pitch to be re-laid, had chances to go in front before Keane's first-half winner.

The former Manchester United centre-back was a constant threat from set-pieces, heading another Burnley corner over the bar before half-time.

Scott Arfield shot off target for the hosts either side of the interval, while substitute Sam Vokes was unable to find the net from 10 yards following Michael Kightly's dummy and Matt Taylor sent a free-kick wide. 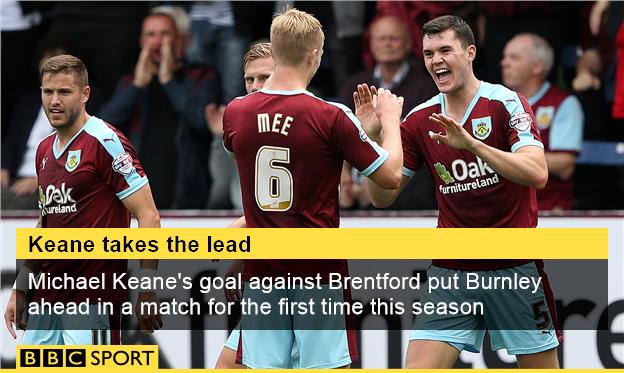 "Overall, there's more to come. I'm absolutely 100% sure on that and Andre will bring something different. There's no guarantee, but Andre Gray's very hungry for success.

"I said we want to be productive in the market and we're still out there if the right move comes along. It's a tough market though. People are not letting their players go easily - neither did we.

"We deserved it in the end. There were some nerves around in the first half. Everyone wanted that first win. It was important to get it."

"It's difficult to lose Andre Gray. His goals won a lot of points. But it's been going on for a couple of weeks and now we can go on and start looking for a replacement.

"Is it a relief? Yes and no. I had a good relationship with him, and we now don't have a replacement on the bench so we are in need of two strikers.

"We were a bit unlucky to lose. We played the first half better. We had good energy and put pressure on the ball and created some very good chances. But we had to score."