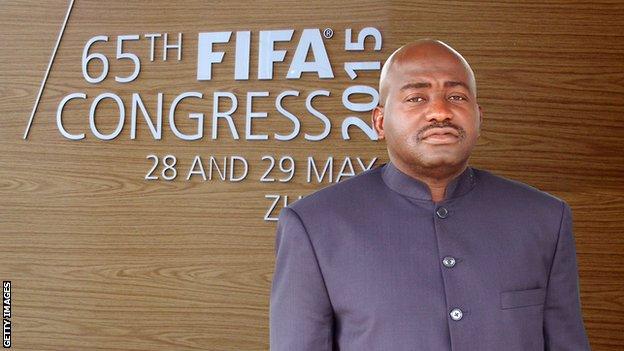 The Confederation of African Football has declined to back Liberian Football Association president Musa Bility in his bid to become Fifa president.

Bility, 48, is one of four men set to stand in next year's election to replace incumbent Sepp Blatter.

"The Caf executive committee decided unanimously not to give Musa Bility the support he requested," Caf stated.

However, Bility told BBC Sport his meeting with the body "was not about Caf endorsing me".

He said: "I'm privileged to have had the opportunity to talk to the entire Caf executive committee, to answer questions - concerns, admirations - all the issues that are wrong with football we discussed. That was a privilege.

"I did not go to get a unanimous vote. I was given an opportunity to explain and lay my platform. That's why I went and I'm happy I got it.

"There is a nomination process going on and the door for other people in African remains open. Until that door closes Caf cannot unanimously support me.

"Caf is the continent's body and it has to listen to and review all options. It has to wait until the close of the nominations and then assess all the candidates before it makes a decision."

Bility is only the second African ever to make a bid for the job.

Brazilian Zico, Frenchman Michel Platini and South Korean Chung Mong-joon are the other names in the frame to stand in the 26 February election.

Bility has stated his belief that "this is Africa's time" to take the lead in world football but his lack of support from his continent's football governing body will be a blow to his candidacy.

The Liberian has had a difficult relationship with Caf in recent years.

In 2011 Bility declared he would vote against Blatter in that year's Fifa elections, in contrast to most of his African colleagues.

And in 2012 he - and the Liberian FA - took a case to the Court of Arbitration for Sport over changes to the way Caf elects its president, which favoured incumbent Issa Hayatou.

The court twice ruled against the LFA and then in 2013 Bility was banned from all football activity by Caf after the governing body said he "had violated statutes relating to the use of confidential documents".

Bility needs the written endorsement of at least five football associations to get onto the ballot for the election to choose a replacement for outgoing president Sepp Blatter on 26 February.

The deadline for candidates to register is 26 October.