The 24-year-old has agreed a six-year deal and is City's fourth high-profile summer arrival after Raheem Sterling, Fabian Delph and Nicolas Otamendi.

It is the second highest fee paid by a British club after Manchester United's £59.7m signing of Angel Di Maria.

"It takes a special player to improve our squad," said City manager Manuel Pellegrini of the ex-Chelsea player.

"We like to play attacking, attractive football. Bringing in a player like this will only aid us.

"He has all of the mental, physical, tactical and technical attributes required to fit straight in."

De Bruyne said: "I want to reach the highest level possible as a player and I think the most important thing is that at the end of the season we can be happy and maybe have some titles."

De Bruyne, who will wear the number 17 shirt at Etihad Stadium, joined Wolfsburg in January 2014 for a reported £16.7m after making three Premier League appearances for Chelsea.

Why did De Bruyne leave Chelsea?

Chelsea signed the winger from Belgian side Genk for a fee in the region of £6.7m in January 2012.

He was at Stamford Bridge for two years, during which he spent spells on loan at Genk (where he scored twice in 13 appearances) and Werder Bremen (10 goals in 33 games).

He started two of the first three league games of the 2013-14 season, but after that began only three more matches - all in the League Cup.

Manager Jose Mourinho walked out of a news conference after being irritated by questions about the midfielder, who had been left out of the squad to face Steaua Bucharest in the Champions League.

"He was not selected. It was my decision," said Mourinho. "Only 11 can play and 18 can be selected. I try to decide, by what they do on the pitch, when they play and what they do in training.

Having made his international debut in 2010, De Bruyne became a Belgium regular during qualification for the 2014 World Cup and with the tournament in Brazil looming and the midfielder struggling to start games, national team manager Marc Wilmots urged him to leave the Blues in search of first-team football.

After his move to Wolfsburg, De Bruyne told Belgian newspaper Het Laatste Nieuws he had "lost his joy" at Chelsea and that he asked Mourinho to let him go.

How has he trebled his value?

De Bruyne has enhanced his reputation since leaving Stamford Bridge.

It took De Bruyne 13 games to score his first Wolfsburg goal, but since then he has netted regularly, while also laying on even more chances for others.

He ended 2013-14 with three goals in four games and last season struck 16 times and made 28 assists as Dieter Hecking's men finished runners-up in the Bundesliga before then winning Germany's domestic cup competition.

During his time at Wolfsburg he created 254 goalscoring chances in 73 domestic matches, resulting in 35 assists. 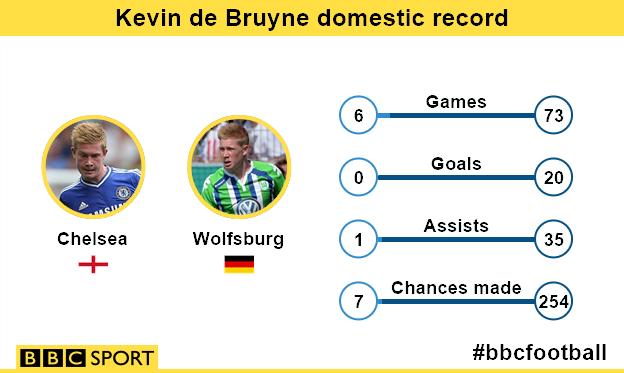 Where will he fit into City's system?

City have begun this season in superb fashion, winning all four of their Premier League matches - including a 3-0 victory over champions Chelsea - without conceding a goal.

Midfielders David Silva and Yaya Toure have played a key role in this positive start, while Raheem Sterling - a £49m signing from Liverpool - has started every game.

During his productive last season, De Bruyne operated mainly as a number 10, the role occupied by Silva, although he also spent some time in Sterling's left-sided role.

De Bruyne has also played on the right of an attacking three and you would expect the man most at threat following his arrival is Jesus Navas, who has looked more effective than last season but whose end-product pales in comparison to one of Europe's most prolific providers.

However, as Match of the Day pundit and former England international Danny Murphy warns: "De Bruyne is undoubtedly a quality player but he is not a natural winger.

"If he were used instead of Navas on the right, City would lose some of their width which is proving so effective at the moment." 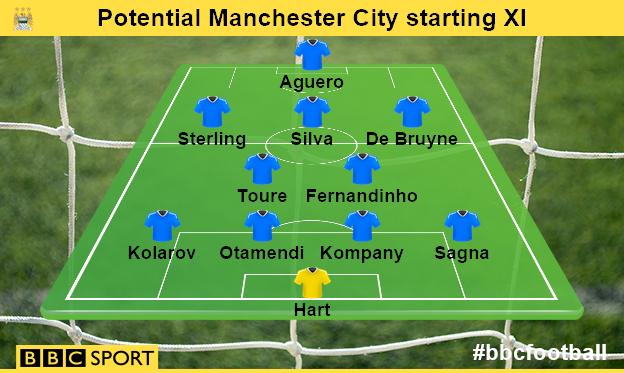