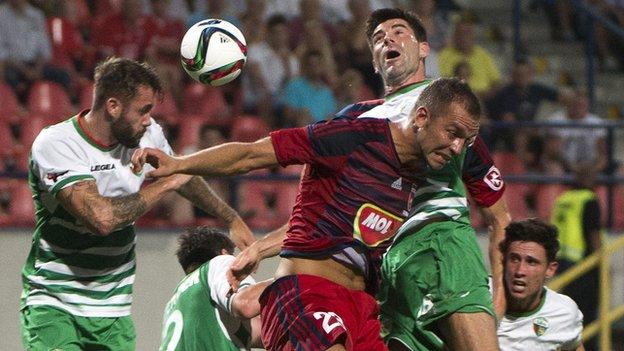 Adam Gyurcso's extra-time goal knocked The New Saints out of the Champions League second qualifying round.

But Gyurcso - who scored the only goal in the first leg last week - gave the home team a 2-1 aggregate win.

Saints striker Mike Wilde missed a late chance, and then Sam Finlay was sent off following an off-the-ball incident in the final minutes.

Videoton started the match as firm favourites following their 1-0 win at Park Hall.

TNS are the only full-time professional team in the Welsh Premier League and were aiming to equal their best showing in Champions League when they reached the third qualifying round in 2011.

With temperatures well above 30C, goalkeeper Paul Harrison denied Dinko Trebotic and Mirko Ivanovski while at the other end Wilde had a header cleared off the line.

When substitute Williams swept in Simon Spender's cross from the right wing, it took the game to an extra 30 minutes.

Both teams slowed down in the heat during extra time, and it took a rare moment of quality from Gyurcso to finally beat Harrison and end the Saints' dream.

Finlay was shown the red card two minutes from the end as tempers frayed.

In the next round Videoton will face Belarus champions BATE Borisov, who beat Dundalk 2-1 on aggregate.

TNS manager Craig Harrison said: "The players were outstanding tonight. We worked out where their weaknesses would be and where our strengths would be and the lads were absolutely outstanding, every single one. I think we have been very very unlucky."