Vicente Del Bosque's side won courtesy of defender Mario Gaspar's header, with Chelsea midfielder Cesc Fabregas missing a penalty in the first half.

Marek Hamsik, Adam Nemec and Robert Mak all netted in the opening 30 minutes of Slovakia's 4-2 victory.

Luxembourg pulled two goals back in the second half through Mario Mutsch and Lars Gerson but Hamsik added another to take his tally to five in qualifying.

Slovakia, who as part of Czechoslovakia won the 1976 European Championship, appeared at their first major tournament as an independent nation at the 2010 World Cup where they stunned holders Italy to reach the last 16.

In the group's other game, Belarus and Macedonia played out a scoreless draw. 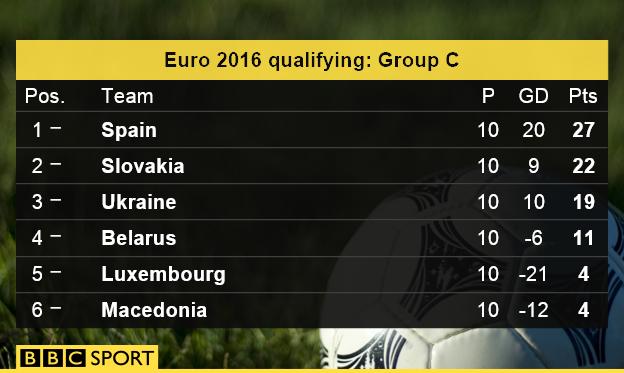 "I never doubted qualification for a second.

"This team has character, quality, and I was convinced we could do it. To advance to the European Championships is something fantastic."

"Ukraine played well but David de Gea was brilliant too.

"Ukraine has a personality that not a lot of sides have and I wish them all the best in the play-offs.

"It was good that we were able to look at some different players and test whether they will be of use.

"It's going to be a problem choosing 23 players but there is still a long way to go."

Shots on Target
Home10
Away7