Ji So-Yun helped Chelsea Ladies to their first major trophy as they beat Notts County in the first Women's FA Cup final ever to be played at Wembley.

South Korea striker Ji scored from close range in the first half, in front of a record final crowd of 30,710.

Leanne Crichton had Notts' best effort cleared off the line by Chelsea forward Gemma Davison after the break.

England striker Eniola Aluko created the winner and was outstanding in a deserved win for the Blues.

Chelsea captain Katie Chapman has now won the cup nine times in her career, having previously lifted the trophy with Millwall, Fulham, Charlton and Arsenal.

Emma Hayes' side, who came into the final off the back of two consecutive league defeats, were beaten on penalties by Birmingham in their only previous Women's FA Cup final appearance in 2012.

Notts, captained by England defender Laura Bassett, were appearing in the final for the first time.

After a relatively tentative start from both teams, Aluko brought Chelsea to life towards the end of the first half with a superb 10-minute spell.

She had the first real chance of the game on the half-hour when she latched onto Davison's ball forward and touched it past goalkeeper Carly Telford, but the angle was too tight for her to apply the finish. 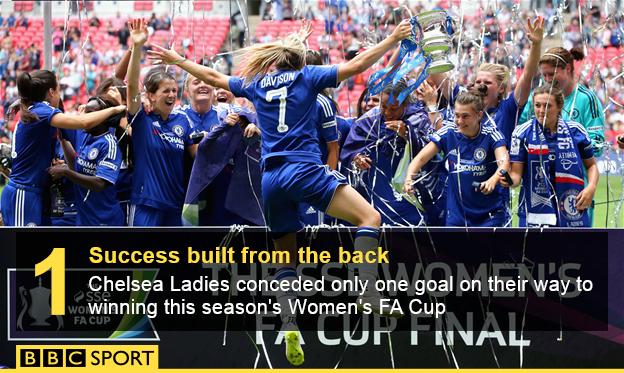 Aluko saw another effort palmed away by Telford and then crossed brilliantly for Davison, who volleyed wide across goal from the back post, before being involved again for Chelsea's goal.

Aluko showed good skill to find Ji in the box, who poked in despite pressure from Telford to net her 15th goal for Chelsea.

Notts County threatened for the first time after the break, with Desiree Scott's long-range effort deflected wide and Crichton's header cleared off the line from the resulting corner.

At the other end, Davison found Aluko in space for Chelsea, but her low, bouncing shot was well saved by Telford, before defender Gilly Flaherty flicked over from three yards out.

Drew Spence lashed a shot wide as Chelsea looked for a second, but in the end one goal was all they needed to finally bring their wait for a trophy to an end.