Wales have achieved their highest Fifa world ranking, entering the top 10 for the first time.

Chris Coleman's side have moved up 12 places to 10th, with England one place above in ninth, up six places. 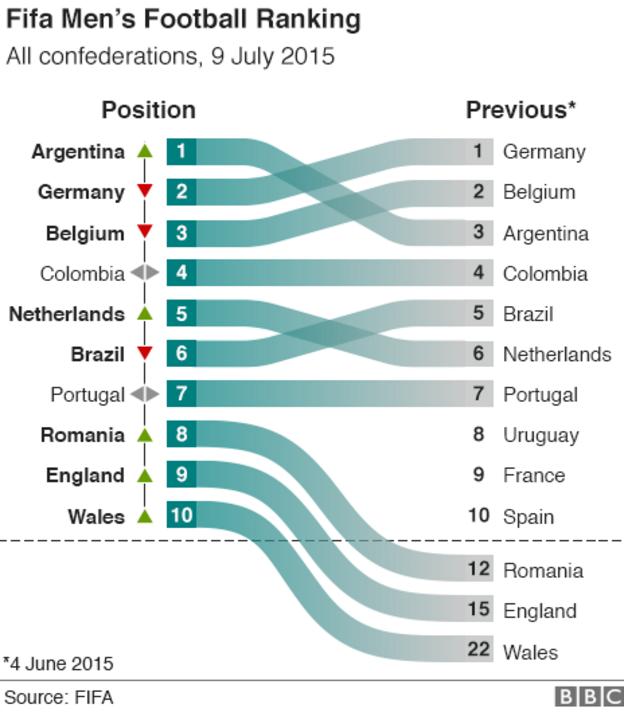 They enter the top 10 after Gareth Bale's goal secured a 1-0 win over Belgium in a Euro 2016 qualifier in June.

They are three points clear at the top of Group B with four games remaining as they bid to reach their first major finals since 1958.

Wales find themselves above reigning European champions Spain in the rankings, with Vicente del Bosque's side down two places in 12th.

"It's a remarkable achievement but it's testimony to all the hard work the players have put in," Wales coach Osian Roberts said.

"They turn up for every camp, they work hard and buy into the game plan.

"They deserve every credit for getting us to where we are in terms of the rankings, although we are fully aware in many ways it counts for nothing - it's about qualifying.

"Our sole focus is on qualifying and getting out of this group."

Argentina top the Fifa rankings despite losing to Chile on penalties in the final of the Copa America.

England enter the top 10 after maintaining their 100% record in Euro 2016 qualification following a 3-2 win in Slovenia in June.

Scotland are down one place in 29th while Northern Ireland rise seven places to 37th.