Arsenal have signed Petr Cech from Chelsea in a deal worth about £10m.

The Czech Republic goalkeeper, who played more than 400 club games in 11 seasons at Stamford Bridge, has joined the Gunners on a four-year contract.

Cech, 33, made only seven league appearances last season after losing his place to Belgian Thibaut Courtois.

In a letter to Chelsea fans, Cech said he thought he would retire at Stamford Bridge, but added: "Life doesn't always turn out the way you think it will."

He wrote: "Last summer, things changed and I understood I was no longer the first-choice keeper, but I felt it was not the right time for me to go.

"During the season, it became clear that my situation would not improve and - as I know I am not at the stage of my career where I want to be on the bench - I made my decision to move and look for new challenges." 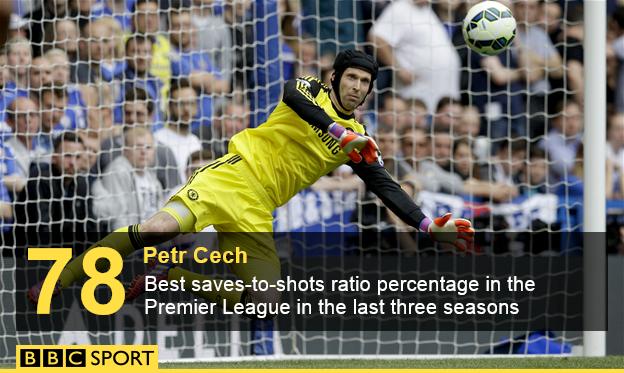 Arsenal boss Arsene Wenger said: "Petr Cech is a player I have admired for a long time and I am very pleased he has decided to join us."

He also set a club goalkeeping record of 228 clean sheets in all competitions, beating the previous highest total of 208, set by former England international Peter Bonetti between 1960 and 1979.

Arsenal midfielder Aaron Ramsey responded to Cech's arrival by posting on Twitter: "Wow, what a signing. One of the best Premier League keepers ever."

Gunners forward Theo Walcott tweeted that he scored his first Arsenal goal against Cech - in the 2007 League Cup final - to which his new team-mate replied: "Happy it won't happen again."

And Arsenal's current number one Wojciech Szczesny, said: "Delighted to have a chance to learn from one of the best GK's in the world."

Cech, Arsenal's first signing of the summer, could face Chelsea as early as 2 August, when the two sides meet in the Community Shield at Wembley.