England captain Wayne Rooney scored a late winner against Slovenia to keep his team firmly on track for Euro 2016.

But their unblemished record was under threat when a catalogue of defensive errors saw veteran striker Milivoje Novakovic put Slovenia ahead just before half-time in Ljubljana.

Wilshere responded with two magnificent strikes for his first goals in 28 England appearances - but England had to suffer the anxiety of Nejc Petnik's headed equaliser before Rooney settled a thrilling affair four minutes from time.

England's captain had wasted a succession of earlier chances but made no mistake as he raced clear to score his 48th goal for his country, putting him level with Gary Lineker and one behind record holder Sir Bobby Charlton.

It was an England display that will have given manager Roy Hodgson much pain before the pleasure of victory, some slick passing and lively attacking being mixed with dreadful defending that would invite greater punishment should it be repeated against a higher calibre of opposition than Slovenia.

Hodgson said beforehand he was not concerned about the manner of the performance so long as it brought the win - but there were aspects of this display that will surely worry England's manager.

The main plus points were the performance of Wilshere, looking dynamic and scoring the goals that had previously eluded him at this level, and the win that makes England's advance on next summer's Euros in France now look little more than a formality.

Hodgson kept faith with Raheem Sterling despite his ongoing contract wrangle with Liverpool and the jeers aimed at him during the goalless draw with the Republic of Ireland.

And he should have rewarded his manager inside three minutes when Rooney was dispossessed and the ball fell perfectly to Sterling. He only had Slovenian keeper Samir Handanovic to beat but lifted a tame finish over the top.

The miss apart, Sterling was a lively performer - but it was Rooney who came closest to putting England ahead with a low shot that was destined for the bottom corner until Handanovic stretched out and got a crucial touch to turn it just wide.

For all England's supremacy, Slovenia were a threat on the break. It brought their goal just before half-time but not without a huge helping of assistance from England.

Phil Jones started England's downfall with a dreadful throw-in and Gary Cahill and Chris Smalling compounded the problem by needlessly stepping up to play offside, allowing Josip Illicic to set Novakovic free to run on and beat Joe Hart.

Hodgson's half-time answer was a novel one, removing the hapless Jones to send on Adam Lallana, and putting midfielder Jordan Henderson at right-back while Nathaniel Clyne stayed on the bench.

Lallana played a part as England drew level 12 minutes after the restart, scrapping for possession in the area before Wilshere ran on to the loose ball and sent a searing 20-yard shot high past Handanovic. 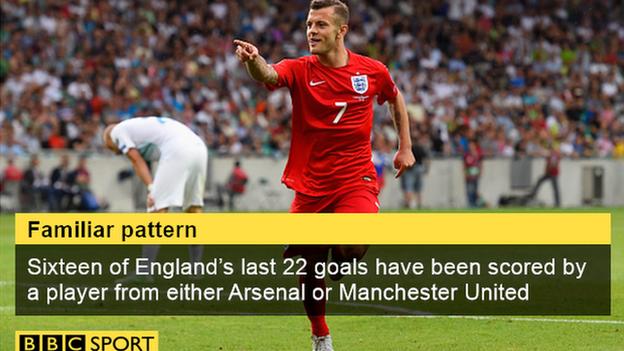 Rooney then wasted two chances as his finishing let him down and it was left to Wilshere to be the main man again as England produced the move of the match to go ahead with 17 minutes left.

Henderson and Andros Townsend linked well on the right and Lallana delivered a clever flick that allowed Wilshere to take a touch to tee himself up before crashing another thunderous left-foot finish high past Handanovic.

England looked to be in control but once again eased off and were punished, Pecnik rising above Kieran Gibbs at the far post to direct a header down and beyond Hart.

As the home fans started to celebrate a point, Slovenia may have relaxed fatally to allow Rooney to edge closer to his place in England history with that late winner.

"Wayne Rooney's performance said a lot about him as a man. He took a nasty blow from an elbow that could have decked many a player and could have caused him to lose his discipline but he was up to concentrate on his job and his role in the team.

"One or two chances had gone begging but he got the chance for the winner and put it away with aplomb. It shows we can rely on that man. I would have liked him to have got a hat-trick so all the talk about the record could have gone away."