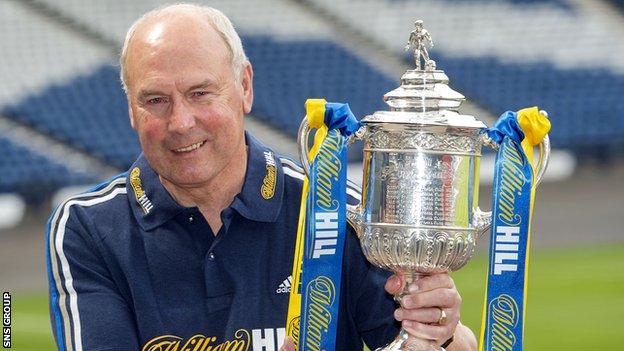 The memories surround Alex Totten. As he walks the corridors of Falkirk Stadium, he points to photographs on the walls that tell of the club's history. They also tell of his own.

He is in some of the team photos, alongside a young Alex Ferguson and Andy Roxburgh. There are some of the players who were in the side that he guided to the 1997 Scottish Cup final.

There is a group of pictures of Falkirk managers, including himself and current manager Peter Houston, albeit a younger version, with a full head of hair and a moustache.

"I signed Peter and he ended up a ginger God," Totten laughs. "He was a smashing player and he's a smashing person. He's no ginger God now, by the way, he's got no hair, like myself."

Anecdotes always seem within reach. Inside his office - Totten is now the club's business development manager - he pulls an old copy of the Falkirk Herald from his bag. It is from 1997 and depicts the aftermath of the cup final, when the Falkirk team returned to the town to a rapturous welcome on an open top bus, despite having lost 1-0 to Kilmarnock.

They called it the 'Family Final', although the it might as well have been the Totten Final. He had been sacked by Kilmarnock earlier that season, and so had either signed or brought through every player in the team that overcame his Falkirk side.

It is a measure of Totten's personality that there is no angst or resentment.

He talks warmly of Bobby Williamson, who succeeded him as Kilmarnock manager and who he still describes as a friend.

Listening to Totten is a pleasurable amble into the past, to encounters with any number of friends, like Ferguson, or Walter Smith, or Craig Brown, who Totten has invited along to Saturday's Scottish Cup final.

He is content with his place in the fabric of the club, and despite a friendship with Houston (they will fly out to Portugal for a golfing trip after the final), he keeps a clear distance from the football department. Yet Totten is central to Falkirk and their latest cup final appearance.

It is the fifth in their history, and the fourth that he has been involved with. He was there as a young boy, taken by his grandfather and uncle, when Falkirk last won the cup in 1957. He managed the side in 1997, and he was a working for the club in a business role when they made the final again in 2009.

Even Saturday's game is full of connections, since he signed Houston as a player and helped out John Hughes, the Inverness manager, when he and Owen Coyle became joint managers of Falkirk earlier in their careers. Both were still playing at the time, and they asked Totten to play a role in the dugout.

His own direct experience of the cup final is mixed. There remains great pride in having guided Falkirk to that stage in the competition, but regret that a Neil Oliver goal was - wrongly in Totten's view - ruled out for offside when the score was 0-0 and the momentum belonged to his team.

"I feel pride obviously, that's the highlight of any manager's career, leading a team out for the cup final," he said. "If we'd won the game, I would likely have retired.

"It was a dream for me to lift the Scottish Cup. But it was a great occasion. One of the papers on the Monday said: "one winner, no losers", because it was a great family cup final. The Falkirk fans stayed at the end to clap the Kilmarnock players. It was just a special, special occasion."

Totten famously wore a kilt to the 1997 final - the Falkirk tartan, naturally - and did the same again in 2009. He won't be repeating that this year, though, since "we got beaten on both occasions. I'll wear my suit this time".

Totten was a Falkirk fan, a Falkirk player, twice the Falkirk manager and still part of the club.

Yet there is more to his career than that. He joined Liverpool at 15 when Bill Shankly was the manager.

He spent 22 years in management, which included taking St Johnstone from the old Division Two to the top-flight in three seasons, as well as second-place finishes in the second tier with Falkirk that would have seen the club promoted if the stadium had a 10,000 capacity.

The pictures on the walls include one of Totten and his grandson kicking a ball around the site of Falkirk Stadium while it was being built. He is, by any measure, integral to the club's sense of itself.

Falkirk took the Scottish Cup on a series of visits to the local community last week, including to the hospice where Totten's mother was looked after.

"With the cup having been here and gone round schools and different places, there has been a real buzz," he said. "There's a big scarf around the steeple up in the town, I was there the other night with my wife and there was around 1,000 people, all the shops have got the adverts up: go and support your local team.

"It's great for the fans who are going, but it would be nice to see the town going. They're representing their community in the Scottish Cup.

"Maw, paw and the bairns will go. One day, some of the young fans could be playing for Falkirk. But most important is trying to bring the cup back to Falkirk. We cannae wait."