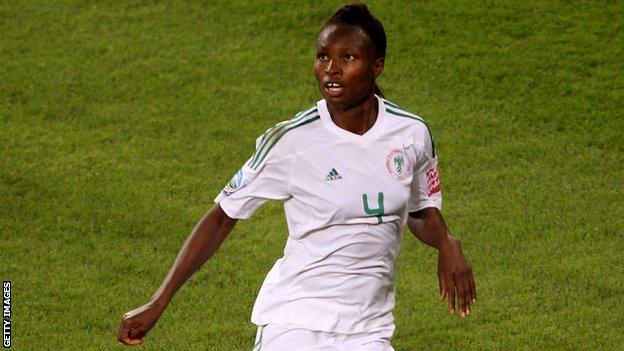 Four-time African Footballer of the year Perpetua Nkwocha hopes to bow out on a high after confirming the Women's World Cup in Canada will be her last.

The 39-year-old will play in her fourth tournament after being named in her country's 23-woman squad for the tournament that begins on 6 June.

The first BBC Women's Footballer of the Year Asisat Oshoala is also included.

"This will definitely be my last world cup appearance and I want to make it count," Nkwocha told BBC Sport.

"Our success at the last African women championship shows that we've got a very competitive Super Falcons side.

"I am surrounded by a some experienced players and talented young ones, I believe we'll give it our all in Canada."

Evelyn Nwabuoku will captain the side, while striker Courtney Dike, who plays for Oklahoma State University in the USA, also makes the final squad.

Coach Edwin Okon will be looking to Desire Oparanozie, who plays in France for En Avant Guingamp of France and was top scorer at the AWC in Namibia, as his main goal scorer.

Nigeria play their opening game in Canada - against Sweden - on 8 June, two days after the tournament starts.

Seven-time African champions Nigeria is the only African team to have played in all Fifa Women's World Cup tournaments since 1991.

But they have failed to translate their continental dominance on the world stage, as their best performance came in the USA in 1999 when they reached the quarter-finals.

The Super Falcons were knocked out in the quarter-finals by Brazil after finishing second in their group.