Graeme Shinnie is sitting in a room in the Caledonian Stadium, looking out of a window on to the pitch that has been his place of work since he was 16 years old.

When next he comes he will have given up his captain's armband and donned the jersey of the enemy - his new club, Aberdeen.

It's hard for a 23-year-old to be wistful about anything, but in Shinnie's case it's understandable. He remembers his first match for Inverness, an under-17 contest against, coincidentally, the very team he will play his last one against on Saturday - Falkirk.

At the time, he thought professional football might have passed him by. He was getting ready for a different life.

He changed tyres, refitted batteries and got to thinking that maybe a mechanic's lot wasn't so bad, even if his father laughed when he came home every evening looking like he'd been swimming in diesel.

That game was the breakthrough. He played centre-midfield and was dominant. On the way home his father said that he knew that young Graeme was good, just like his older brother Andrew, but it was only now that he realised how good.

Those words meant a lot, especially when they were endorsed by the club by a way of a contract.

The Cup final awaits. The last stand - and more reason for reflection. Just over four years ago Inverness played a Scottish Cup tie against Morton.

"I couldn't move," he recalls. "I don't know how I got through the game. Beforehand, I was saying to the boys, 'I'm not feeling great, I'm really struggling here,' and I went into hospital and they told me it was Crohn's disease.

"I'd had it when I was much younger but it was a pretty mild version. Now it was a lot worse. It's a swelling in the digestive system. You're knackered all the time, you can't eat, you lose weight.

"It was a career-threatener. I had a seven-hour operation and when they were in they found a few abscesses. I was in Raigmore hospital for a month and a bit. I lost a lot of weight, I was weak, I couldn't eat because of the pain in my stomach and I had part of my bowel removed.

"I was thinking, 'Will I ever get back to football, will my life change because of this? Terry Butcher was the manager and he was fantastic. He popped into hospital nearly every day. He was really good to me.

"I was only saying this to my family the other day. Back then, when I was lying in the bed, I couldn't see things working out the way they have.

"I've just become a dad, I've got this Cup final to look forward to and I'm about to make a very exciting move to Aberdeen, where I come from. I owe Inverness so much. It's been a brilliant place to be for the last seven years. Such a positive club, full of good people."

This will be his second Cup final, of course. The first was unforgettable for the fans of the team he is about to join but something altogether different for Inverness. The League Cup final loss to Aberdeen is something he looks back on with particular regret - about the loss, of course, but also because he didn't find it in himself to step up and take a penalty in the shoot-out in those frenetic moments at Celtic Park.

"It felt like nobody wanted to win it on the day," he says. "Neither of us were prepared to take a gamble and go and do something special. It was like we were both afraid to concede a goal and it was boring for the fans to watch.

"All the pressure was on Aberdeen and they didn't want to let the fans down. It goes to penalties and it's horrible.

"We know what it's like to lose and we don't want that feeling again on Saturday. We've got to go in saying, 'I'm going to grab this game by the scruff of the neck.' We have players who can do that.

"I kick myself every time I think about that shoot-out. I wanted to take one, but I was exhausted. I'd run myself into the ground and I'd taken a few heavy tackles. I should have dug deeper and stepped up.

"From that day on I've regretted not finding the energy to do it. If it goes to penalties against Falkirk then I'm definitely taking one."

Life has been interesting under John Hughes. He calls his soon-to-be-former manager a "madman" but says it with affection. He says he's different from Butcher in the style he wants the game played but that the thing that unites them both is that they won a lot of matches and raised the bar. 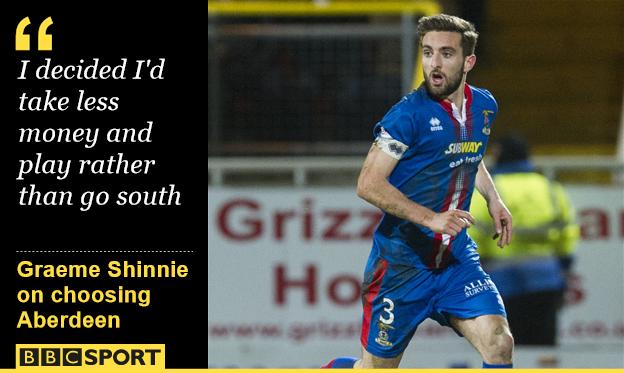 "Terry's way was a more hard-working, chasing-lost-balls kind of philosophy and John is the opposite. He wants us to make the ball do the work; keep it, pass it, make the other team do the chasing.

"I hope the fans will agree that we're playing better stuff under Yogi but under Terry we were winning as well and as long as we were winning we were enjoying ourselves.

"Derek McInnes has a similar way of looking at it as Yogi. When I met him I was really impressed with his vision for the club and, in my heart, it feels like the right move. I had a few options to go to England but I felt that Aberdeen was the club where I would progress best.

"I spoke to my girlfriend, Jodie, and my family and her family and had a real good think about it. I could have had more money down in England.

"Money is a lot of things in life, but being happy and enjoying my football is more important. The money's good here anyway. You're doing something you love, you're working until midday and you've got plenty of time with your family. It's a great life.

"People get a bit hung up on my money. If you're playing then you're happy and your family is happy. When I was weighing it up, I decided I'd take less money and play rather than go south and take more money and maybe not play.

"If you're not playing then you're unhappy and you take it home with you and that's not a good situation to be in - away from home and frustrated.

"Things that you normally don't get upset about suddenly bother you because you're not in the team and you're on a downer.

"I've seen players who went to England just for the sake of saying they've done it. I've signed a three-year deal and after that if anybody comes calling and it's the right move, then maybe. I'll be 26 or 27. Hopefully, I have plenty of time."

None of that matters now, of course. Not yet. The Cup final is all that he can see. Saturday and Falkirk and a chance to make history on his final day. Inverness are favourites and he accepts it. There's no mind games, no attempt to duck and dive. If they play to their maximum they should win, that's the bottom line.

"We know we have the squad to beat any team. We've beaten Celtic, the best team in the country, twice this season including in the semi-final, which was the most enjoyable day of my career.

"We can't be reserved and be sitting back and hoping for something to happen. We need to go out and do it. That's the lesson I hope we've learned from our last final. You have to seize the moment."

He's only 23, but he has a wise head to go with all the talent and he knows that days like these don't come around all that often - at his current club or his future one.