Gareth Bale's fine performances for Wales this season have contrasted with those for his club Real Madrid, says former Wales captain Kevin Ratcliffe.

The forward, 25, has been jeered by some supporters in his second season at the Bernabeu and faced heavy criticism from sections of the Spanish press.

"I think that's just down to confidence and maybe he's gone back in his shell a little bit," Ratcliffe said.

"Definitely when he comes away with Wales he's out of that shell."

Barring an unexpected injury, Bale will win his 50th cap for Wales on 12 June in the Euro 2016 qualifier against Belgium in Cardiff.

Bale has scored four goals in five games for his country this season and Wales have a great chance to qualify for Euro 2016.

Belgium top Group B with 11 points from five games, one place ahead of Wales on goal difference only. 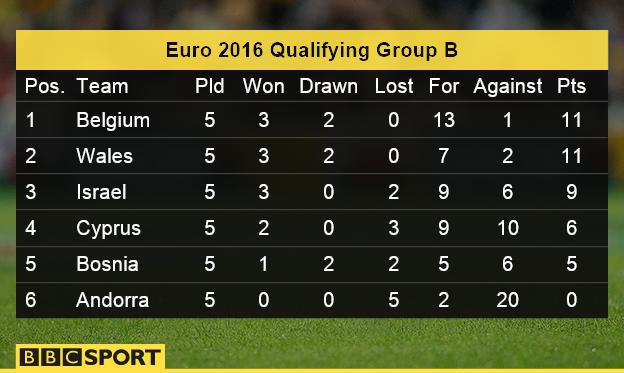 A win over Belgium in June at a sold-out Cardiff City Stadium will put Wales in a great position to reach their first major finals since 1958 - and Ratcliffe knows Bale will be crucial for Chris Coleman's side.

"There's no doubt about that. He wants the ball, he makes himself available.

"I think he likes that, some players like that responsibility and to be fair to the lad he's responded to that as well and given us [Wales] what we've wanted - and that's a chance to qualify.

"It's something I've not seen him do for Real Madrid this year... he's actually marking the full-back, he's not trying to get away from him, create space for himself.

"There has been rumours that one or two of the players wouldn't pass to him, but then if he's marked he's not making the effort to get away from somebody."