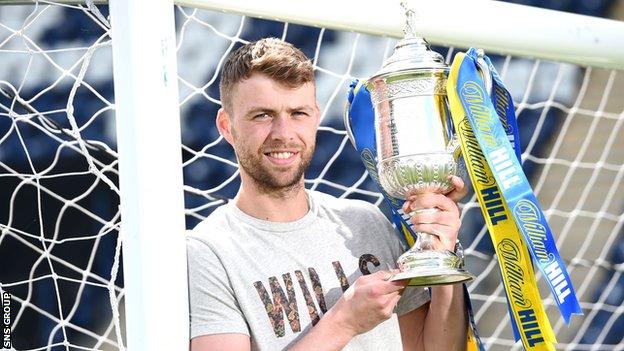 Loy, 27, is the club's top-scorer with 12 goals but has not played since picking up an ankle injury on 6 March.

"It is a big call whether he starts or comes on as an impact player," said Houston. "By Thursday I will know.

"Rory trained today and didn't miss a minute of the session and he is getting sharper."

Falkirk have not played since the Championship campaign ended on 2 May but Houston has been keeping his squad busy, with Loy featuring in a bounce game at Swansea last week.

"Rory came with us to Swansea last week and got some game time against them as well," added Houston, who won the Scottish Cup with Dundee United in 2010.

"He is getting better every day, so I have a huge decision to make nearer the end of the week but, to be honest, it is looking good.

"He has been a big loss to us when he has been out.

"When he missed the semi-final against Hibs we thought maybe his career at Falkirk was over but it has given us time to get the fitness levels back into him."

Loy will join Dundee on a three-year deal in the summer and Houston knows he will want to end his time at Falkirk on a high note.

"Rory has loved his time at Falkirk," said the 56-year-old former Scotland assistant.

"Even after he signed the pre-contract with Dundee his attitude and commitment to Falkirk has been huge.

"Losing him had a big say in us not making the play-off places because I felt him and John Baird were very good.

"We have good strikers underneath that but they don't have the experience of Baird and Rory playing together.

"He will want to sign off playing first and foremost but I think he is desperate to win that cup as well."

Inverness may be playing in their first Scottish Cup final but the Highlanders will be firm favourites, given their third place finish in the Premiership.

However, Loy has faith in his team-mates and is bullish on his chances of making a contribution.

"There's no reason why, on any given day, we can't beat them," he told BBC Scotland.

"Our league has been competitive this season and there are lots of teams who I think would be competitive in the league above and we've beaten some of those teams.

"We went to Tynecastle and won, we played Hibs five times with only one defeat and picked up a couple of draws with Rangers.

"The boys are all excited and training hard. There's a real sense of anticipation now and it's building.

"You watch the final every year and that's obviously what you aspire to. I've not scored in the Scottish Cup this season, so hopefully I can put that right on Saturday."