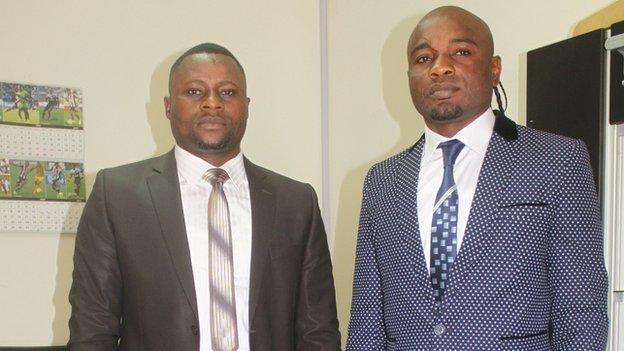 The two players were joined in filing nominations to be a members of parliament by Mazembe's assistant coach Pamphile Mihayo.

All three are standing for the opposition National Party for Democracy and Development in parliamentary elections later this year.

The trio aim to combine their political ambitions with their roles at Mazembe.

Flamboyant goalkeeper Kidiaba (pictured on right), famous for his bum-hop celebrations, and Mihayo (pictured left) will stand in Katanga's provincial capital Lubumbashi, where Mazembe are based.

While Kasusula hopes to be elected in the city of Kisangani.

Mihayo, who was captain when Mazembe reached the final of the World Club championship in 2010, believes he has what it takes to be a legislator.

"I know the needs of the people, who can defend them better than a sportsman?," he said.