The Championship club said they had made the decision following a "thorough review of the 2014-15 season".

McClaren, 54, who has been strongly linked with the managerial job at Newcastle, joined Derby in September 2013 and led them to the Championship play-off final in 2014.

Derby finished eighth in the second tier this season, missing out on the play-offs.

"The club means a huge amount to me, and I was not looking to leave," added McClaren.

"While we were all unhappy with the way the season ended, I still believe real progress was being made.

"I do not believe or accept that rumours linking me to the Newcastle United job were a factor in the team's performances this year, as had been alleged.

"I wanted to remain with the club and was confident in leading the side to a successful season next year."

The Rams were leading the Championship in late February but won only two out of their last 13 league games. 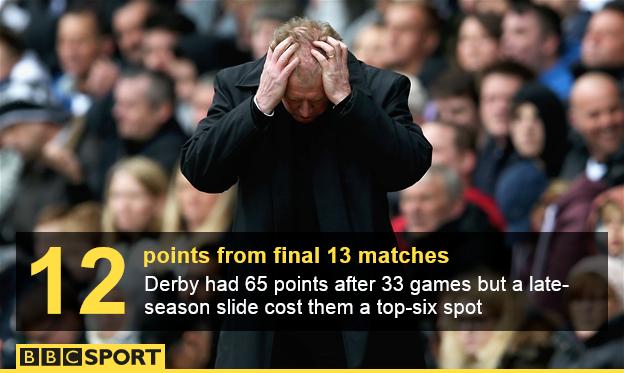 And their 3-0 home defeat by Reading on the final day of the Championship season left them outside the top six, having looked almost certain to be battling for promotion to the Premier League again after the previous season's near miss.

In the weeks that followed that defeat, former England boss McClaren, who had two years remaining on his contract, held talks with chief executive Sam Rush.

Derby announced the decision around an hour after Norwich beat Middlesbrough in the Championship play-off final at Wembley to earn a place in next season's Premier League.

The club statement continued: "The board believes that the appointment of a new head coach is required to continue the club's on-field progress and the search is now underway to appoint a successor.

"The board remains firmly committed and driven to achieving promotion to the Premier League."

As well as coaching England from 2006-07, McClaren was previously manager at Middlesbrough, FC Twente, Wolfsburg and Nottingham Forest.