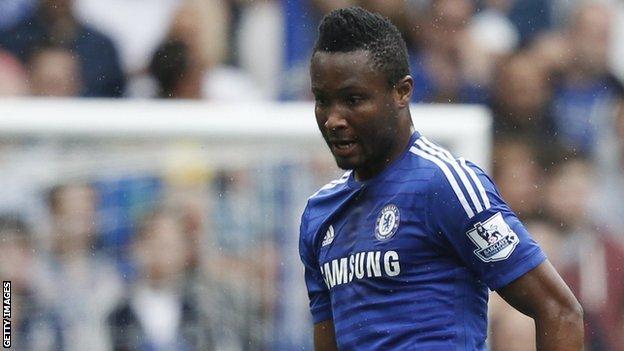 Keshi has left the 28-year-old out of his squad for next month's 2017 Africa Cup of Nations qualifier against Chad.

"It's true that I couldn't reach him when he was injured but that's not the reason for his omission," Keshi told BBC Sport.

"We've spoken and contrary to reports [in the local media] there is no problem between us at all."

Mikel has not played for Nigeria since November but Keshi insists the door remains open for the midfielder.

"He's an integral member of this team who brings a lot to it. Right now we are only giving opportunities to some new players," he added.

Another notable foreign-based absentee is defender Elderson Echiejile, who plays for Monaco in France's Ligue 1.

But there is a surprise recall for Slovakia-based Rabiu Ibrahim, who has yet to make his senior debut, while Watford's Odion Ighalo is expected to make his competitive debut against Chad in Kaduna on 13 June.

There were first-time call-ups for William Troost-Ekong, Kingsley Madu and Anderson Esiti.

The 15 foreign-based stars will join other locally based players at their Abuja camp next week.

Keshi, who won the Nations Cup as a player with Nigeria in 1994 and coach in 2013, is confident he can revive the Super Eagles after their failure to qualify for the recent finals in Equatorial Guinea.

"We have a big task ahead to rebuild this team and I am confident we are going to bounce back," said Keshi.

"The door is not shut on anyone; those invited must show they deserve it by giving their best."