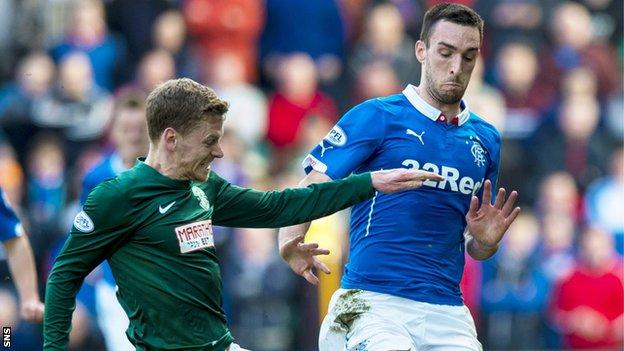 Since his move to Ibrox in January as part of the Newcastle Five, that turned out to be the Newcastle One, Haris Vuckic has been a source of goals and creativity for Rangers.

In a strange deal, involving four ghosts, his spirit has been important to his adopted club. His footwork is excellent, his eye for a goal is sharp and his vision is that of a player who belongs at a much higher level than the second tier of Scottish football.

He has scored nine times in his 18 games in this competition - and has a number of assists.

And yet, if the story of Rangers' ascent to the Premiership is to be written in the coming weeks - a big if - then people at Ibrox might remember Vuckic's contribution more for a goal-line clearance in the endgame against a thrusting Queen of the South than for anything he has done in attack.

In nutting Derek Lyle's net-bound shot off his own line 14 minutes from the end of Sunday's fractious play-off second leg, Vuckic spared Rangers the purgatory of extra-time and maybe even penalties. And it was just as well for Stuart McCall's team were flagging at that point.

Knowing their weakness, Queens bombarded the home team with balls into the box, the very source of their goal earlier in the match when the 5ft 9in Lyle out-jumped and out-hungered a pair of Rangers centre-halves, one of them 6ft tall and the other three inches taller than that, to power a header past another six-footer in the home team's goal.

In those closing minutes, every time the delivery was decent into the Rangers penalty area the temptation was to call 999. There was an anxiety in their back four - which became a back five when Bilel Mohsni came on to the field, bringing with him all the composure of a man with his trousers on fire.

Rangers hung on and they deserved to. They created more chances and were the better team. And they showed some character. When Lyle suckered them with that opening goal against the run of play you wondered about Rangers' heart. Did they have the stomach for the fight now?

They are such an unpredictable team, a side that beat the near-imperious Hearts one week and then lost 3-0 to Queen of the South the next, a side that followed up the loss to Queens with a trouncing of Raith Rovers only to toil against bottom-placed Livingston the week after.

They were 2-0 down against Falkirk and rallied for 2-2. They were 2-0 ahead against Hearts and imploded and drew and were fortunate not to lose.

What was coming next for the team with little consistency? Actually, it was an impressive response. They dug in. Every player demanded the ball. There were no shirkers. No passengers. A shortage of quality is one thing but a shortage of fight is another - and Rangers had plenty of fight, no question.

Zander Clark had to be in exceptional form to keep them out at times. Even then, he was powerless to stop the equaliser going in.

Rangers have improved as an attacking force under McCall, but they have issues at the back which would have been obvious to the watching Alan Stubbs even if somebody had put a blindfold on him.

You didn't have to see how uncomfortable Rangers can be in defence. You could hear it. McCall referred to it later. The crowd, he said, delivered noise, at times, that was reminiscent of his own glory-filled playing days in this place but, at other times, they had an angst that was more reflective of their modern-day struggles.

They were victorious, but they were more relieved than over-joyed. They lived to fight another day and the aesthetic didn't seem all that important to them when that final whistle went. This is a time of the season when the bottom line is all that counts and the bottom line tells us that come Wednesday it'll be Rangers, and not Queen of the South, that will host Hibs in the first leg of the semi-final.

The slickness of some of Rangers' attacking play will have interested Stubbs, but you got a mental picture of the Hibs manager leaning forward in his seat every time the Rangers defence had to deal with crosses.

Darren McGregor and Marius Zaliukas are McCall's first-choice centre-halves and that's not going to change on Wednesday night. After those two, McCall's got Mohsni and, if he's fit, Lee McCulloch. The latter is something of a troubled soul, the former is a bizarre microcosm of all of this football's clubs ills in recent years - wasteful, indisciplined, unreliable.

From now until Wednesday evening, people will make calls on how this semi-final is going to go. You could make a big case for Hibs because they have won three out of the four meetings in the league this season and have, on their day, the kind of players who could cause Rangers big problems at the back.

You could also make a case for Rangers because if the Ibrox team have displayed a flakiness then they're not alone.

Hibs finished the season with five straight wins in the league, but there was one wounding loss in the midst of that run and it was in the Scottish Cup semi-final against Falkirk. The pressure was on them that day and they flunked the test. Like Rangers, they have their own issues to deal with. Their own strengths, too.

We could analyse the form until we're green around the gills and blue in the face but you can't measure mental strength. As teams, there's not a lot between them, but as characters and leaders, who knows until they're out there?

All that we do know is that this great struggle for a place in the Premiership is reaching an end now and that it is absorbing. Two games this week and no safety net. Nirvana for the neutral.