Atletico Madrid will try to see off interest from Chelsea in forwards Antoine Griezmann, 24, and Koke, 23, by raising their buy-out clauses from about £43m to closer to £100m in new contracts this summer. (Guardian)

Outgoing Liverpool captain Steven Gerrard, 34, has already had talks with the club's chairman, Tom Werner, and manager Brendan Rodgers about returning to Anfield in a coaching role when his LA Galaxy contract expires. (Times - subscription required)

But the Reds have been told they will have to pay more than £20m to sign Real Sociedad defender Inigo Martinez, 23. (Talksport)

Newcastle have cancelled an end-of-season awards dinner scheduled for next Wednesday at St James' Park, as it would "not be appropriate" with their Premier League status yet to be secured. (Sun - subscription required)

Inter Milan will pursue the signing of Manchester City midfielder Yaya Toure, 32, across the summer, according to the Italian club's president. (Daily Mail)

Leicester City goalkeeper Kasper Schmeichel, 28, is a target for Arsenal should they fail to sign Chelsea's Petr Cech, 32, this summer. (Telegraph)

And the Foxes will make a bid of £8m for Japan forward Shinji Okazaki, 29, this summer after reopening talks with Mainz. Telegraph)

Arsenal will receive £3m if Barcelona win the Champions League as part of the deal that took defender Thomas Vermaelen, 29, to Spain last August.(Independent)

Former Sunderland and Brighton manager Gus Poyet, 46, is on a list of names Leeds United chairman Massimo Cellino has put together to replace Neil Redfearn at Elland Road. (Daily Mirror)

Brentford's outgoing boss Mark Warburton says he has been in contact with Liverpool manager Brendan Rodgers and Burnley boss Sean Dyche for advice as his side look to overturn a 2-1 deficit against Middlesbrough in the Championship play-off semi-final on Friday. (getwestlondon)

QPR's 32-year-old midfielder Joey Barton has been frustrated in an attempt to return to Ligue 1 club Marseille next season due to his wage demands. (Independent)

Fifa president Sepp Blatter has not visited the USA for almost four years as he fears being questioned by the FBI regarding their ongoing investigations into the bidding process for the 2018 and 2022 World Cups, claims a documentary. (NBC Sports)

Everton manager Roberto Martinez will not be with the Toffees side for the Europa League second qualifying round tie on 16 July if they get into that competition via the Fair Play ratings - instead he will be with the main squad, who face Stoke in the Barclays Asia Trophy in Singapore on the same date. (Daily Mirror)

West Ham boss Sam Allardyce says only the celebrated illusionist Harry Houdini could have done a better job than him at Upton Park over the past four years. (Guardian)

Chelsea goalkeeper Petr Cech has posted footage of himself on YouTube playing drums to a Rihanna track. The 32-year-old tweeted: Haven't done a female artist drum cover ... So today I changed it :-)). 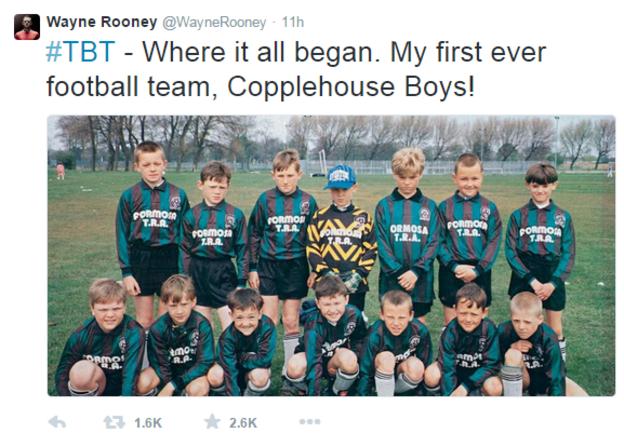 Manchester United and England captain Wayne Rooney has posted a picture on Twitter of the first football team he ever played for.

A fan of eight-time Manchester United title winner Gary Neville has had the 40-year-old's face tattooed onto his leg. (Manchester Evening News)

Virgin Trains, sponsors of Preston North End, has apologised because bank holiday engineering works will leave the club's fans stranded in London after the League One play-off final on 24 May. (Guardian)