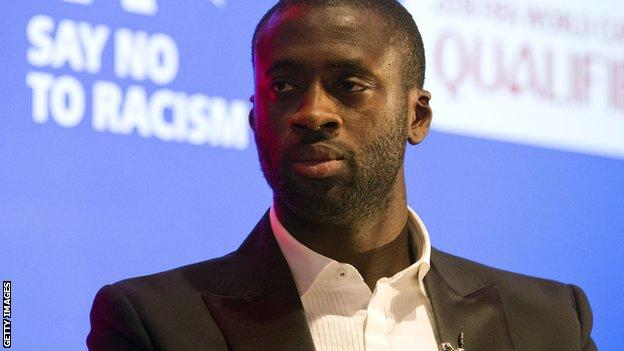 Yaya Toure says racist abuse has the power to "break" players and wants to see tougher sanctions brought in.

"I have been in the situation where there have been monkey chants and it's difficult to deal with that," he said.

"When you hear something like that it hurts you and breaks you."

The Ivory Coast international, who turns 32 on Wednesday, said existing punishments do not go far enough.

"You need to give them a radical sanction - paying a £20,000 fine is not enough, you need to do more," said Toure, who was also subjected to racist abuse on social media in November.

The new system will identify, and send observers to, high-risk matches among the 900-plus qualifiers for the 2018 World Cup. All 64 games at the finals will also be monitored.

The system is being overseen by European anti-discrimination body Fare, whose executive director Piara Powar said: "If there is evidence of discrimination this will be passed to Fifa and there will be associations who will be banned or play behind closed doors.

"There will be some pain as a result of this process but without that pain people will not really understand how they should be tackling these issues."