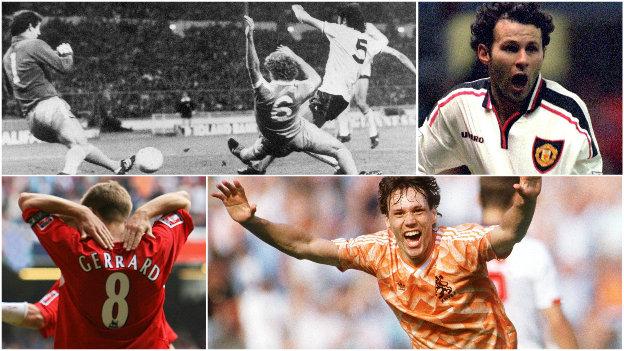 You will be able to vote for your favourite all-time goal from Match of the Day's goal of the season competition next Saturday - FA Cup Final day. The shortlist of five goals has been chosen from a panel of BBC football experts and will be revealed on Sunday's Match of the Day.

We've all got a favourite. We've all wasted hours day-dreaming about one. We might have even attempted it ourselves. And yet can any of us agree?

The ultimate goal. Not the critical shinner from a yard out that won you promotion, or the one bundled over the line that kept you in the league, but a goal of aesthetic perfection. It should be so straightforward. So why isn't it?

A distinction which appears uncomplicated but that soon escalates into arguments of personal refinement, intelligence and - according to the radicals - whether you really understand football at all.

On one side, the Roundheads: all for collective power, all for the team ethic at the expense of the individual ego. On the other, the Cavaliers: who cares how many players touch it, as long as the finish makes you lose your mind with disbelief and joy.

Consider the 26-pass Argentina move that ended with Esteban Cambiasso scoring against Serbia and Montenegro in the 2006 World Cup. To those who believe themselves true connoisseurs, that goal almost ended the argument. Serbia were reduced to the role of impotent stooges. Argentina were untouchable.

And yet to others it was clinical rather than breathtaking, a maths puzzle solved rather than the rapturous work of art that was Maxi Rodriguez's volley (seven passes in the build-up) for the same team in the same tournament. Anyway, didn't Cambiasso actually slice the final shot?

In Britain we tend to favour individual inspiration. Of the last 25 winners of Match of the Day's goal of the season, only one has truly been a team affair - Jack Wilshere's (Arsenal v Norwich) in October 2013.

We appear to be a nation in love with thunderbolts. We like nets that threaten to burst rather than billow, prefer a foot like a traction-engine to a delicate dink. Does this make us footballing Philistines?

The perfect goal is not only about the finish, any more than a journey is all about the destination. Yet even the loveliest scenery en route will not be enough if the end point lacks beauty.

Wayne Rooney's 2006-7 goal of the season (Man Utd v Bolton, March 2007) is as much about how he arrived into the penalty area - via a length-of-the-field fast-forward interplay with Cristiano Ronaldo - as the chipped finish. The appetiser to Steven Gerrard's long-range strike in the FA Cup final the previous year (v West Ham, Millennium Stadium) is by contrast mere scraps: lumpy ball into the box, defensive header, mishit clearance. It's all finish.

There is a lot to be said for the dramatic escalation in drama that a good build-up brings, the fizzing tail of a firework about to explode in a shower of light and colour. Ryan Giggs' 1999 FA Cup semi-finals strike (v Arsenal, Villa Park) worked for the neutral because every Arsenal defender he beat took you further off your seat.

Yet the goal from nowhere brings with it shock as well as awe. Trevor Sinclair's overhead kick for QPR against Barnsley in 1997. Maynor Figueroa's quickly taken free-kick from inside his own half for Wigan against Stoke in 2009.

Which way lies satisfaction - through footballing foreplay, or tales of the unexpected?

An easy gauge, you'd think. The harder a goal to score, the closer to perfection it must be. But just as the perfect pop song can be a simple three-minute ditty based on three chords, so the perfect goal may not have to feature a seven-minute guitar solo played behind the back.

Creating astonishment in onlookers is essential. So too are aesthetics.

Carlos Alberto's contact with a ball coming across him in the World Cup final of 1970 was impressive, but it wasn't impossible. What makes that goal a sacred testament to the genius of that Brazil team and that era was the approach play and the sheer joy of the finish - more than mere technique, more than just mastery of a difficult skill.

And time changes our perspective. It can be said without trashing our heroes of yesteryear that some goals considered extraordinary 50 years ago would now barely raise comment.

"Oh. My. Word!" exclaims the BBC's David Coleman after Eusebio fires in an angled shot in Portugal's 3-1 win over Brazil at the 1966 World Cup. "Have you ever seen anything like that?" To which the modern viewer can reply: yes, a couple of times a week on Match of the Day.

To those of us who were children at the time, Ricky Villa's 1981 FA Cup final replay dribble (v Man City, Wembley) appeared to be impossible to ever surpass. Yet a hard-core Spurs fan of my acquaintance recently dismissed that wonder-strike as nothing more than a slow-motion jog past defenders as effective as cardboard cut-outs.

And this from a man who has also happily cheered on former Spurs players David Kerslake, Kevin Scott and Grzegorz Rasiak.

Like kids raised on PlayStations shaking their heads at Rubik's Cubes, like the Rubik's generation looking back mockingly at tin cars, bowling hoops and sticks, are we in danger of being spoiled by the wonders of the modern age?

The role of the goalkeeper

He has no role, you might say, except to pick the ball out of the net.

But wait. A good dive - no, a wonderful dive, back arched, fingertips despairingly brushing the goal-bound shot - frames a great goal in the way that an immobile 'keeper never can.

The 'keeper who remains rooted to the turf implies the shot was so good it was impossible to stop. Why even bother moving? Except it will always leave the question hanging: had they dived, had the ball swerved, might they just have had a chance?

A lament, while we're at it, for the penchant of goalkeepers of the distant past for paying tribute to a great goal by lying motionless on the ground afterwards, still in the superman position, as if mortally wounded by the sheer beauty of the strike.

Seldom has it been better illustrated than by Mexico's Ignacio Calderon after Bobby Charlton's howitzer in England's group stage win at the 1966 World Cup. It's almost as if he was keeping his head down in fear of further incoming fire.

The role of the woodwork

A perfect goal should surely require no assistance from post or crossbar. How can it be perfect if it found the net only with the help of a nudge in the right direction?

And still. There is something about a kiss off the crossbar that makes a special goal that little bit more special.

It's an exclamation mark, a salute from a single gun, the starter's pistol for the celebrations to follow.

It's always a delight to see the crowd celebrating wildly behind the goal. It reflects and amplifies our own amazement in a way that the hung heads and raised fingers of a side who have just conceded never could. Should some kids wearing flares and home-knitted scarves briefly escape the perimeter fencing to celebrate on the pitch, all the better.

And what of the camera angle that captures the moment? Watching it happen from behind the ball - think Justin Fashanu's 1980 goal of the season (flicked up on the turn, volleyed from the corner of the penalty box) for Norwich against Liverpool, or Ray Wilkins in the 1983 Cup final (cuts in from the right, curls a left-footer into the top corner) - allows the viewer to enjoy every tiny fraction of the ball's trajectory.

Against that, the sweet shock of seeing the ball travelling in what might be the direction of the goal or 10 feet wide of it, to suddenly sliding down the back of the net: Marco van Basten's extraordinary volley in the final of Euro '88, Zinedine Zidane's left-foot round-house volley against Bayer Leverkusen in the 2002 Champions League final, Giovanni van Bronckhorst's left-foot pile-driver v Uruguay in the 2010 World Cup. With it, the warm anticipation of seeing it in all the way from the replay to follow.

If the build-up is taken into account, so must be the aftermath.

Mania seems entirely fitting: the celebrations of Marco Tardelli in the 1982 World Cup final or Alan Sunderland in the 1979 FA Cup final (months and hundreds of miles apart, yet eerily similar) are worthy of far better goals.

Equally, the understated - Charlie George flat on his back in the 1971 Cup Final, Eric Cantona simply raising his arms and glaring everywhere after that dribble and chip against Sunderland - can allow us to focus purely on the splendour of the goal itself.

Does the perfect goal exist outside of a match's context, or does the effect it has on the match -or season, or tournament - act as some sort of multiplication factor?

Think back to that Ricky Villa goal. Manchester City midfielder Steve MacKenzie's right-foot volley from the edge of the box earlier in the game was arguably just as sublime a strike in its own way. But while MacKenzie's volley made it 1-1, Villa's won it.

Had the scoreline and score order been reversed, would we still think of the two goals in the same way?

1.Set-piece v open play. Is a scripted line better than one improvised, practice superior to the unique?

2.Headers pt 1: why are they so maligned? Keith Houchen's effort for Coventry in the 1987 Cup Final is the only header to win Match of the Day's goal of the season in the last 30 years. Headers pt 2: do all great headed goals have to be diving (Houchen, Robin van Persie v Spain at last summer's World Cup)?

All the examples here are of goals scored when television cameras were present.

Think of all the great goals that were missed, that were scored before the invention of the video tape, that have been lost to mere memory rather than preserved by video-sharing websites.

There may be a goal out there that none of us have ever seen. It may exist only in the mind of an ageing striker or supporter.

Like the tree that falls in the woods with no-one in earshot, can the perfect goal exist if it will never be seen again?