Lionel Messi, Luis Suarez and Neymar took their combined seasonal tally to over 100 goals as Barcelona piled the pressure on title rivals Real Madrid by thrashing Getafe at the Nou Camp.

The visitors fell behind early on to Messi's cheeky chipped penalty.

Suarez's volley, a precise finish from Neymar and Xavi's curler - in the space of five minutes - put Barca in command.

Suarez thumped home to make it 5-0 at half-time, before Messi's dink as Barca moved five points clear in La Liga.

Second-placed Madrid have the opportunity to reduce that deficit back to two points - with four matches left - when they host relegation-threatened Almeria at the Bernabeu on Wednesday.

Barcelona's comfortable victory against mid-table Getafe stretched their unbeaten run to 15 matches, winning 14 and drawing one, in all competitions.

And the Catalan club, who are also in the Champions League semi-finals and Copa del Rey final, know if they can manage to win their last four La Liga matches then they will regain the title from last season's surprise winners Atletico Madrid.

However, even one draw could be enough to hand the trophy to arch-rivals Real, who would win their first Liga since 2012 if the teams finish level on points.

Spanish teams who finish level on points are separated by their head-to-head record - not goal difference - and Madrid have the superior record this season.

Carlo Ancelotti's side won 3-1 at the Bernabeu in October while Barca triumphed 2-1 at the Nou Camp last month. 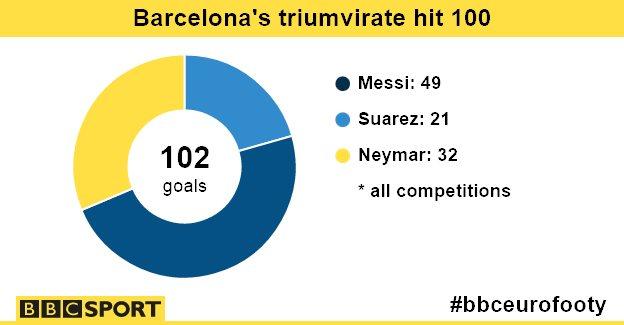