Wayne Rooney broke a record that had stood for 45 years when he converted a late penalty against Switzerland on Tuesday night to become England's leading scorer with 50 goals.

The 29-year-old Manchester United striker overtook Sir Bobby Charlton's mark of 49 goals, and in doing so laid claim to being the greatest striker the country has produced.

Captain Rooney was earning his 107th cap, having made his debut as a 17-year-old in 2003. He scored his first goal against Macedonia later that year. But just how did he go from teenage sensation to being England's most prolific forward?

A very different route to the top

There are five Englishmen to have scored 40 or more goals in international football - with Rooney replacing Manchester United legend Charlton at the top of the table.

Charlton scored the last of his 49 goals against Colombia in 1970, while Jimmy Greaves struck the final one of his 44 in 1967.

Rooney levelled Charlton's record of 49 in his 106th appearance - the same number of games Charlton played for England.

The breakdown of their goals says a lot about their era. Charlton and Greaves scored a combined six tournament goals and just nine in qualifying - with the vast majority (83.87%) coming in friendlies.

In contrast, goals in qualifying tournaments have become much more of a factor in the modern era - 20 of Michael Owen's 40 and 30 of Rooney's 50 came in these matches.

Gary Lineker - Golden Boot winner at the 1986 World Cup - leads the way when it comes to goals at major tournaments with 10 at two World Cups.

Rooney's greatest impact on tournament football to date came as a teenager at Euro 2004, when he scored twice against both Switzerland and Croatia before breaking a bone in his foot during the quarter-final defeat by hosts Portugal.

Since then, however, he has scored just two more goals at major tournaments, with a winner against Ukraine at Euro 2012 followed by his goal in the defeat by Uruguay at the 2014 World Cup - his only World Cup finals goal.

How Rooney broke the record

The goal with which Rooney broke the record was his sixth penalty for England, given after Raheem Sterling was tripped inside the box. 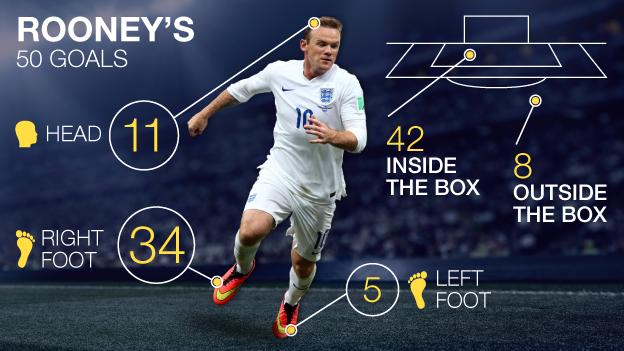 One criticism levelled at Rooney is that he has scored lots of his goals in easy wins against weak opponents.

Indeed Rooney has only scored the outright winner for his country on six occasions, more frequently scoring in resounding victories.

Rooney has scored just three goals against members of the current top 10 in Fifa's rankings, in 14 appearances. He scored in a friendly against Argentina in 2005, and scored in two friendlies against Brazil, both in 2013.

On the other hand, 21 of Rooney's goals have come against teams currently outside the top 50.

San Marino (five goals) are his favourite opposition, while he has also put four past Croatia and Switzerland, though he has never scored a hat-trick.

Next step - matching the world's best

Rooney is now England's most prolific player but he is some way short of the leading all-time international goalscorer - Iran's Ali Daei, who managed 109 goals in 149 appearances at an average of 0.73 goals per game.

Rooney's average of 0.46 leaves him some way short of the goals per game average of some of the leading scorers - Pele's Brazil scored 77 in 92 but even that pales in comparison to Hungarian legend Ferenc Puskas, who hit the net 84 times in 85 appearances, leaving him averaging 0.99 goals per international.

Republic of Ireland striker Robbie Keane is the leading goalscorer still playing international football, with the 35-year-old netting 67 times in 141 caps since his debut in 1998. 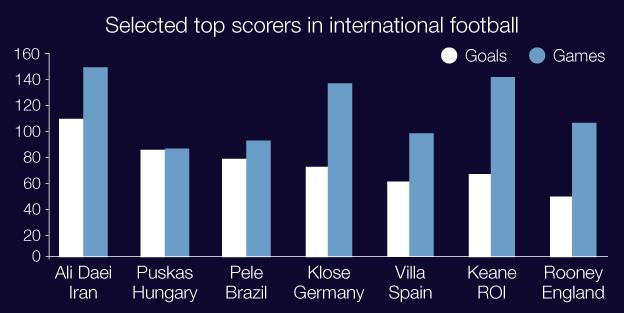 Rooney's record is likely to stand for some time yet.

England's next top scorer in the current squad is Arsenal's Theo Walcott, with seven in 41 appearances.