The 2015 Women's Super League One season gets under way on Wednesday, with defending champions Liverpool Ladies looking to win the WSL crown for the third year in a row.

The most thrilling day in the history of top-flight women's football in England decided the title last season, as Matt Beard's side came from third at the start of the final day's fixtures to pip Chelsea by a goal difference of just two.

Birmingham City were also part of the race, eventually finishing a point adrift after drawing 2-2 against Notts County - with Lady Magpies keeper Carly Telford having a massive hand in deciding the title by saving a penalty from England striker Karen Carney.

It was gloriously dramatic and heart-wrenchingly exciting, and not all the fun of the 2014 season was contained to just one day.

Arsenal collected their 13th FA Women's Cup, beating an Everton side that would eventually be relegated after 21 years of top-flight football.

Manchester City marked their first season in the WSL by winning the Continental Cup, and then there was the European exploits of Bristol Academy, who progressed to the Champions League quarter-finals with a remarkable win over Barcelona in the last 16.

Add into the mix the prospect of a World Cup in June, and the 2015 season should deliver the same drama, as the array of England internationals and contingent of foreign stars aim to make an even bigger impact on the WSL. 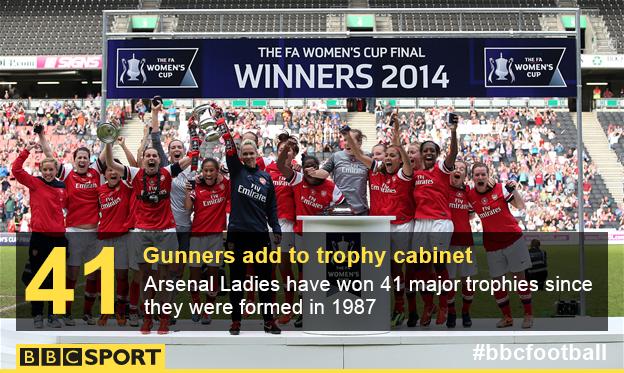 Arsenal right-back Alex Scott told BBC London: "By Arsenal's standards, you have to say last season was disappointing, but we stuck together and we did well to finish fourth and still come away with silverware with the FA Cup.

"We've got a new manager and he's really exciting. With the players he's brought in, we can push on again."

Ones to watch: Striker Lianne Sanderson and goalkeeper Siobhan Chamberlain made headlines for their performances as England beat Canada 1-0 in the final of the Cyprus Cup earlier this month, but the Arsenal squad also includes several other vastly experienced internationals, including former England captain Casey Stoney and the national team's record goalscorer Kelly Smith.

Key early fixtures: Arsenal will be the last of the eight teams to get their league season under way when they travel to Notts County on Thursday, 2 April, but the first really tough test of their title credentials could come on 19 April when they visit big-spending Manchester City. 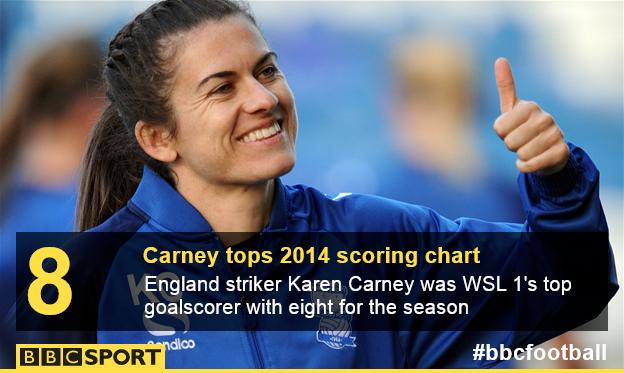 Birmingham City Ladies boss David Parker told BBC Sport: "I could not tell you who will win the league - of course I want it to be us. There is no pressure on us. The only pressure is from within because we know how good we are.

"Notts County have a great shout, but the real pressure is on Liverpool, Manchester City and Chelsea - they have invested a huge amount of money. Liverpool, as champions, will want to defend that crown."

Ones to watch: England striker and last season's WSL 1 top goalscorer Karen Carney became the first woman to be inducted into Birmingham City's Hall of Fame earlier this month. Jo Potter has also been quick to make her mark this season, scoring a superb free-kick against Liverpool to secure Birmingham's passage to the last eight of the FA Cup.

Key early fixtures: Manchester City are first up in the league on Sunday and, after beating reigning WSL 1 champions Liverpool in the fifth round of the FA Cup, the two teams will meet again next month in the quarter-finals of the competition. 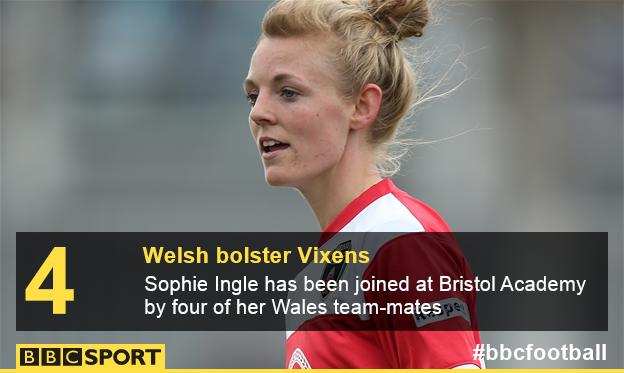 Bristol Academy captain Grace McCatty: "Our biggest hope is to challenge for the Champions League again. Having had such a successful run in the competition this year, we want to put ourselves in good stead to qualify again.

"Our hope is a top-two finish in the league and an FA Cup final would be nice."

Ones to watch: Goalkeeper Mary Earps may have had five put past her in Bristol Academy's Champions League quarter-final first-leg loss to Frankfurt, but her efforts in goal limited the damage. Wales captain Sophie Ingle will be key in a new-look side trying to capitalise on their run in Europe.

Key early fixtures: Bristol Academy return home for their WSL 1 season opener at Stoke Gifford Stadium against Chelsea on Thursday, 2 April, having already played a two-legged Champions League quarter-final tie against Frankfurt and faced Everton in the fifth round of the FA Cup. 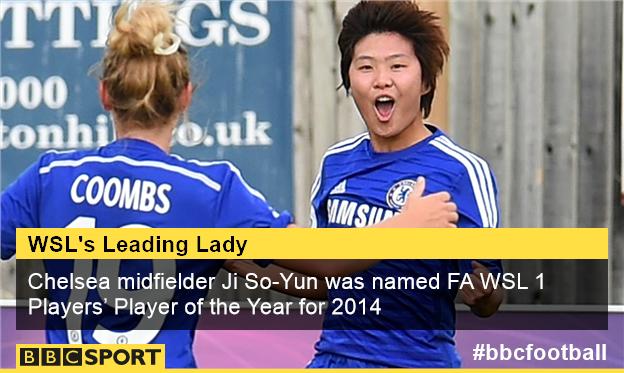 Chelsea left-back Claire Rafferty told BBC London: "Last season, the league was ours to lose, but it was a position we had never been in before.

"We want to replicate last season and go one step further and actually win the league."

One to watch: Winger Gemma Davison moved to Chelsea from champions Liverpool during pre-season, in what could prove to be a pivotal signing in the title race. Striker Eniola Aluko will also be hoping to maintain the confident form she showed for England during the Cyprus Cup.

Key early fixtures: Chelsea's first home game is against last year's winners Liverpool on Sunday, 19 April and they will be out for revenge after being pipped to the title by such a narrow margin last season. 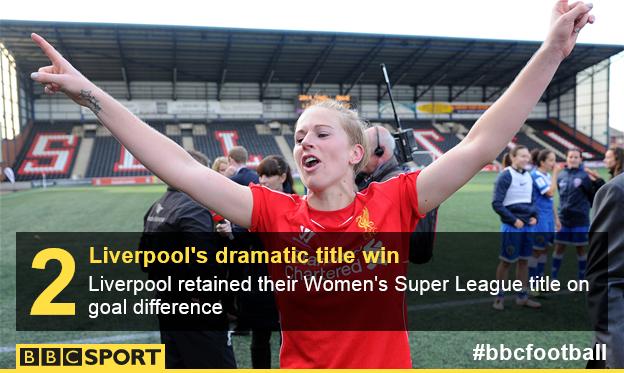 Liverpool coach Matt Beard told BBC Sport: "It is going to be tough because you've got clubs like Chelsea, Manchester City, Arsenal and Notts County as well, who have all invested heavily in their playing squad. Unfortunately, we have not really been able to do that, so it is going to be tough.

"But that (defending the title) is our aim and I think we've got a good enough squad here to do that. We've just got a to show a little bit of belief within ourselves."

Ones to watch: New signing Asisat Oshoala won both the Golden Boot and Golden Ball as Player of the Tournament at last year's Under-20 World Cup. The Nigerian also becomes the first player from Africa to compete in the Women's Super League. Liverpool captain and centre-back Gemma Bonner led the team to their second WSL title last season with the second-best defence record in the league.

Key early fixtures: The pressure will be on the defending champions to start their campaign with a win on Wednesday, when they host newly promoted Sunderland. Reds boss Beard has called on his side to bounce back from their disappointing defeat by Birmingham in the FA Women's Cup on Sunday. 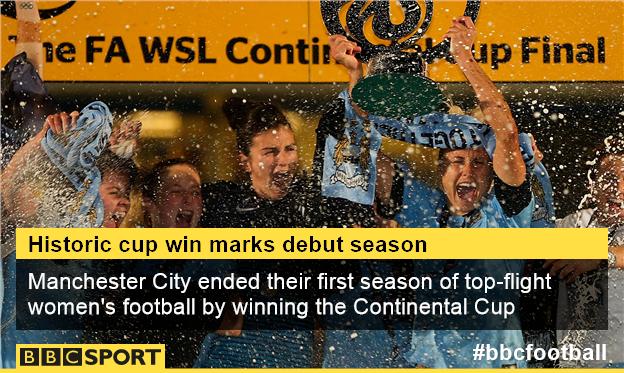 Manchester City defender Lucy Bronze told the BBC: "Some of the players that we have brought in are unbelievable talents. We have got a really good attacking force, solid defenders and a really good balance now. You can just see goals in our team.

"At City, we're halfway there at the moment. We're still not the finished product. We still want to build. We're not going to stop until we keep being successful."

One to watch: Striker Nikita Parris is on a season-long loan from Everton. The England Under-23 forward was Everton's player of the year last season and scored a brace on her City debut against Doncaster in the FA Cup earlier this month. England striker Toni Duggan has recovered from knee surgery in time to be fit for the start of the season and has already opened her account with a goal in the FA Cup.

Key early fixtures: Starts do not get much tougher than Birmingham away and then, after hosting Arsenal on 19 April, Man City will travel to defending champions Liverpool on 25 April. 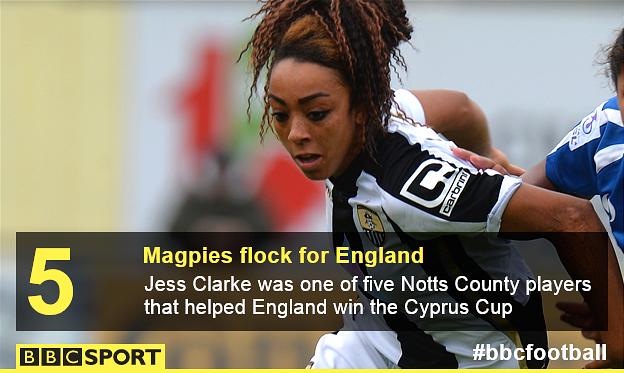 Notts County goalkeeper Carly Telford told BBC Sport: "Personally and for the club, we want silverware this season. We want to finish as high as we can and want to get one of those Champions League spots.

"This league is going to be exactly like it was last year. There are a whole load of teams that have strengthened, I don't think anyone is weakened."

Ones to watch: Fit-again England striker Ellen White marked her return from injury and debut for Notts County with a goal in their FA Cup fifth-round win over Tottenham - 15 months after initially joining the club from Arsenal. Canada midfielder Desiree Scott will return to club duties after the mid-season break as she will remain in camp with the national team in the lead-up to the World Cup in her home country. 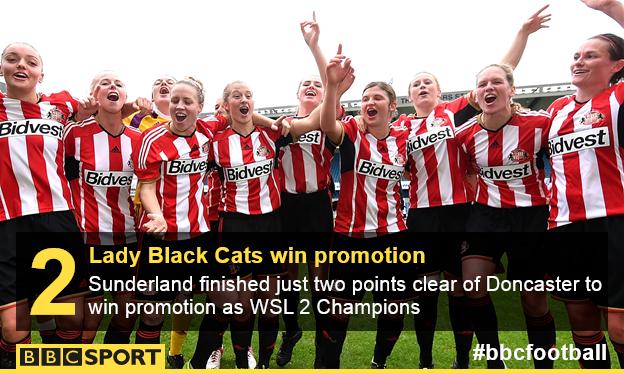 Sunderland striker Beth Mead told BBC Sport: "Our hope is to get a good foothold in the league, try to stay up and prove to people that we belong in this league.

"It will be a new challenge and an exciting one. The girls are looking forward to playing new teams. It will help us develop as a team and individually.

"I don't think there is an easy game this season, as most squads have strengthened. We want to finish as high as we can, play well and surprise people."

Ones to watch: England Under-23 striker Beth Mead bagged 30 goals for Sunderland last season as the Lady Black Cats won promotion to the top-flight as WSL 2 champions. Former Everton and England midfielder Kelly McDougall is in her sixth year with the club and her experience has never been more important.

Key early fixtures: They face the toughest start possible, with their introduction to life in WSL 1 away to the defending champions Liverpool. They then have successive home games against Manchester City and Bristol Academy.

Across WSL 1 and WSL 2, there will be a total of 16 commentaries live on BBC 5 live sports extra this season, including Liverpool's opening game against Sunderland on Wednesday, 25 March.