Lifelong Oldham fan Scholes, 40, has been linked with the vacant manager's job since Lee Johnson left the club.

He helped in a coaching role at Old Trafford at the end of last season, but currently works as a television pundit.

"I'd love to have him on board, [but] it's difficult," Corney told BBC Radio Manchester.

"You have to ask 'would Oldham be the right club for somebody like Paul?' It's not just about us wanting Paul, it's 'would it be the right thing for him?'

"I think one day he will come and manage the club, but it's all about timing with him." 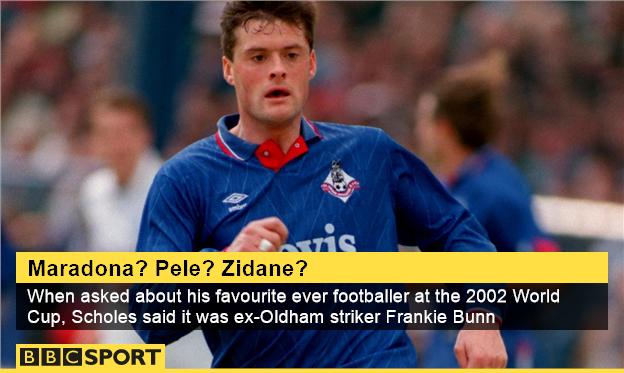 The pair, along with fellow ex-United players Ryan Giggs, Nicky Butt and Gary Neville, own a 50% share in the club.

"We speak on a regular basis and Paul regularly comes down and does training sessions with head of youth Tony Philliskirk," added Corney.

"He's a friend of the club, we know what Paul's all about - he's very low key.

"He turns up at the games and never sits in the directors' box, he sits there with his two lads with his flat cap down and you wouldn't even know he was there."

The League One side, who are currently 13th in the table, say they have had over 70 applications for the manager's job and Corney revealed he has spoken with former Oldham boss Iain Dowie about the position.

You can listen to the interview with Simon Corney and new Oldham director Anthony Gee on the iPlayer.