In his regular BBC Sport column, Robbie Savage looks at Sunday's Capital One Cup final and explains why, despite Nemanja Matic's suspension and Tottenham's good form, he expects Chelsea to collect their first trophy of the season at Wembley.

Despite what Chelsea manager Jose Mourinho may say, his side are favourites to win Sunday's Capital One Cup final - and for good reason.

It suggests that Chelsea are a one-man team and they are clearly far from that.

Spurs went out of the Europa League on Thursday but will be full of confidence on the back of their good run of domestic form, which includes their stunning 5-3 win over the Blues at White Hart Lane on 1 January.

Mauricio Pochettino's side have made massive strides in the last few months but, even without Matic to protect their defence, I think the quality of Chelsea's attacking players will give them the edge.

More to Chelsea than just Matic

Results alone show how important Matic has been to Chelsea this season - they have lost only one out of the 37 games that he has played in all competitions.

Without him, they have lost two out of three - with defeats coming against Newcastle in the Premier League and that embarrassing defeat by Bradford in the FA Cup.

As I said on Match of the Day on Saturday, I have sympathy for Matic, who misses a cup final because of his reaction to the terrible Ashley Barnes tackle that could easily have sidelined him for seven or eight months.

His reaction was understandable, but you cannot do it, and he had to be sent off.

I look at him as the best defensive midfielder in the Premier League and his statistics back that up - he has made the most tackles in total and also the joint-second most tackles per game in that competition.

But he is not the only reason Chelsea are top of the table and well placed to progress in the Champions League, on top of their trip to Wembley on Sunday.

They have got two brilliant goalkeepers, are defensively well-drilled, brilliantly creative and hard working in midfield and ruthless up front.

Because John Mikel Obi is injured, it looks like Ramires will replace Matic against Spurs. Mourinho's only other options are inexperienced duo Nathan Ake and Ruben Loftus-Cheek.

Ramires does not have the same presence as Matic, but alongside Cesc Fabregas he will still form a very effective deeper midfield pairing.

Mourinho was only playing mind games ahead of the final with his comments, but saying that Chelsea are outsiders without Matic is not exactly a confidence booster for the Brazilian.

Maybe he should remind his manager that the game where Matic tasted defeat was when Spurs shocked Chelsea by putting five goals past them on New Year's Day.

Matic did not make the difference on that occasion.

Christian Eriksen pulled him all over the place to take him out of position, exposing Chelsea's lack of pace when John Terry and Gary Cahill are at centre-half.

Trying to do exactly the same again is Tottenham's best bet, which could lead to another very open game - there have been an average of more than four goals in each of their last seven meetings since 2012.

Chelsea were taken apart defensively on New Year's Day, which was not what you expect from a Mourinho team.

Harry Kane was Spurs' star, scoring two goals, setting up another and winning a penalty too.

But Pochettino deserves credit too for getting his tactics spot on and using Chelsea's approach, with Diego Costa up front, as an inspiration.

He used Kane to spearhead his high-tempo attack, with plenty of runners off him to give him support.

Kane was everywhere, as his touch map below demonstrates. 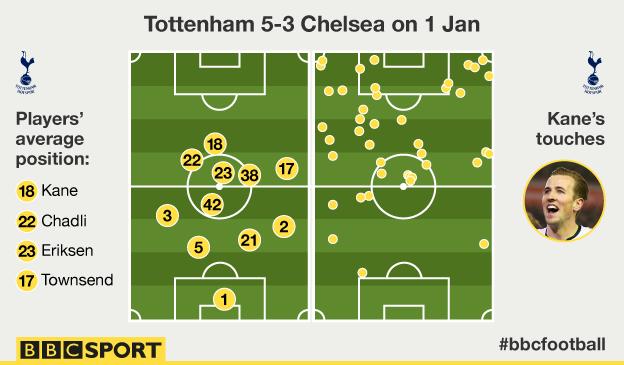 He dropped deep or hit the channels to look for the ball so he could link play or run at defenders, and got on the end of moves inside and out of the area.

The boy knows where the back of the net is too - he can score from all angles, as he showed with both of his goals that night, and he is strong and good in the air too.

His progress has been a great example to young players because he had to bide his time before getting into the first team, then did it in the Europa League before getting his chance to show he could do it in the Premier League as well.

Kane's emergence has clearly played a big part in Tottenham's improvement over the last two or three months, because he definitely fits into the way Pochettino wants his teams to play.

Pochettino likes his players to press high up the pitch and close the ball down as a group.

That starts from the front with Kane, certainly more so than when Tottenham's other strikers, Emmanuel Adebayor and Roberto Soldado, are playing.

It has taken a while for Pochettino's philosophy to turn into positive results, but he has got the Spurs players fitter and his training regime means they can still work exceptionally hard late on in games.

That work-rate is a fundamental part of their success and it has brought them plenty of rewards recently, such as their draw against West Ham on Sunday thanks to Kane, who followed up to score when his 96th-minute penalty was saved.

Only Arsenal and Manchester City (both 10) have scored more goals in the final 10 minutes of league games than Tottenham, who have now hit nine.

Those nine goals have come in seven games, and have seen them pick up a total of 14 points. Without them, Spurs would be stuck in mid-table, not fighting for the top four.

As well as work-rate, to play the way Spurs do you need desire and it has taken Pochettino time to find the players who give him both.

Partly because of all those late goals, Tottenham have gained more points (16) from losing positions than any other top-flight team - they never give up.

So the alarm bells should already be ringing for a Chelsea side who have conceded a higher percentage of their Premier League goals - eight out of 22 - in the last 15 minutes of matches than any other team.

It should be a very good game, but I still see Mourinho's side coming out on top, and winning the League Cup will be an important platform for them.

It was Mourinho's first trophy when he came to Chelsea for the 2004-05 season and it could also be his first trophy of his second spell at Stamford Bridge.

Just like they did 10 years ago, I expect them to go on and win the Premier League title too.