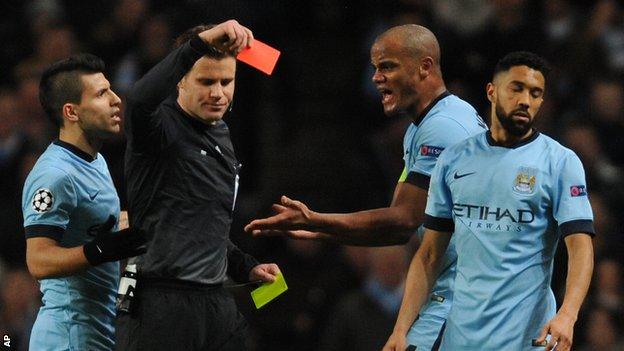 Barcelona beat Manchester City 2-1 in their Champions League last-16 first-leg tie on Tuesday - but who were the standout performers?

How did they do in our player ratings?

Manchester City ratings (marks out of 10)

He gambled by playing two up front against a team with the midfield might of Barcelona and paid the price as they turned their possession into chances and first-half goals. It took until the second half for City's attacking line-up to start to threaten - when they did, they looked dangerous but by then they were already 2-0 down.

Had no chance with either of Barca's goals and his brilliant penalty save from Lionel Messi means City have at least a glimmer of hope in the second leg. Hart also made a fine block to deny Luis Suarez with the score at 1-0.

His duel with Neymar down City's right was one of the few even contests in a one-sided first half, even if the Brazilian escaped him twice with some fancy footwork. But Barca still found space down that flank for their second goal and his tackle on Messi to concede Barca's late penalty was the challenge of a tired man.

City's captain improved after half-time but this performance only increased the doubts over his current form. Before the break his judgement was poor and his positioning even worse. He was perhaps unlucky that the ball rebounded off him and fell for Suarez for Barca's opener but he was frequently found wanting when Barca came forward.

A better night than the last time he faced Barca, when he was sent off and conceded a penalty but still looked far from comfortable and was dragged from pillar to post by the movement of Barca's front three.

Booked for two clumsy second-half tackles and his dismissal ended any hope of a City comeback, capping a mostly miserable night.

Defensively, he was given a torrid time down his flank by Messi and Alves, and going forward his crossing was not good enough, save for one delivery that did find Dzeko's head.

His most positive contribution was when he tackled Messi near the half-way line, starting the attack that led to City's goal.

Like Silva, Nasri was virtually anonymous for most of the first half. One of the few times he got on the ball in an area where he could do any damage, he fired straight at Ter Stegen when he had time to do far better. Disappeared straight down the tunnel when he was taken off with half an hour to go.

Fernando was not helped by Pellegrini's decision to play two strikers but, if he was chasing shadows in midfield, he did not catch many of them.

Sluggish and seemingly unable to pass the ball forward, it meant that again, we saw how much City miss Yaya Toure when he is not playing, especially in games of this size.

Put in a shift and at least tried to find his strikers on the few occasions he had possession but could do little to prevent City being out-numbered, out-manoeuvered and out-played in midfield in the first half. His hard work helped City get back into the game in the second half.

Silva simply could not get a foothold in the game before half-time. His darting runs began to be more effective after the break, none more so than when he burst into the box before playing in Aguero to pull a goal back for City.

City's biggest threat in the first half, although that is not saying a lot. He had six efforts on goal, more than any other City player, and his best attempts were all headers.

Dzeko sent two of those wide either side of half-time but should have done a lot better with the one he did manage on target - a header straight at Ter Stegen when he was unmarked and about eight yards out.

Did not get a sniff of goal in the first half - his first shot of the game came when he curled an effort wide in the 54th minute - but kept running and eventually got his reward, with a fine finish from Silva's lay-off. His quality means City are not out of this tie but they need to find him far more often in the second leg.

Added more bite to City's midfield and was the only player trying to drive forward with the ball, although he did so with mixed success.

Not a classic Champions League debut for the £25m striker. Gave the ball away with his first touch and skewed a scuffed shot well wide with his second. He came on seconds before Aguero scored but was not involved in the goal.

Brought on as an emergency left-back following Clichy's dismissal and managed to get forward well.

If Lionel Messi had put away his late penalty, this tie would be all but over, as it is, Barca return to the Nou Camp with it firmly in their grasp. Asked after the game if his side's first-half performance where they over-ran City was their best of the season, he replied "no" ... I would have loved to have seen the matches where they played better.

Barca's German keeper had little to do for an hour, apart from keep out efforts from Samir Nasri and Edin Dzeko that were placed straight at him. Blameless for Aguero's goal.

Solid defensively and a constant menace with his runs and inter-play with Messi down the right. He scored Barca's second goal in their 2-0 win at Etihad Stadium a year ago and came within inches of repeating the trick when he broke clear and hit the bar before half-time. Kicked out at a bottle in frustration at being substituted.

Edin Dzeko got the better of him in a couple of aerial duals but on the deck Pique made two vital sliding blocks to stop crosses from Edin Dzeko and Sergio Aguero from reaching their intended target as City fought back after half-time.

A couple of no-nonsense early tackles on Dzeko and Aguero set the tone for his all-action performance that saw him come out of defence to battle for the ball in midfield in the second half. He was rarely beaten, by fair means or foul, even when City came into the game.

Came forward frequently and made good use of the ball when he got it in space on the left. His cross was met by Luis Suarez for Barca's second goal.

A willing and intelligent runner, who tackled back and denied City space in midfield but also looked to get forward. His run made space as Suarez, Messi and Alba combined for Barca's second goal.

Found enough space in City's midfield to drive a bus through, let alone play an inch-perfect pass. He did plenty of that when Barcelona were on top and was disciplined enough positionally to help keep City's attack-minded midfielders subdued too.

Played more passes - 99 - than any other player on the pitch and 93 of them found their intended target, a statistic that shows the influence he had in establishing Barca's midfield dominance in the first half as he orchestrated play, with City unable to get close enough to stop him. He did not get near City's area himself but he did not have to thanks to the willing runners he had ahead and to either side.

His late failure from the penalty spot and subsequent miss with the rebound took a slight shine of an otherwise wonderful performance which was full of flicks, tricks and fantastic close control. At times in the first half he might have been on the same pitch as City's players but he appeared to be from a different planet.

His first game in England since leaving Liverpool was never going to be short of fireworks and he was the perfect player to make the most of City's unconvincing centre-back pairing. Suarez was alert enough to capitalise when Messi's cross hit Kompany and fell for him and his second goal was another poacher's finish after a superbly-timed run into the box. His movement and runs on and off the ball made him a handful for City's entire defence.

The least effective of Barca's front three, with only one shot at goal, but still dangerous and still a handful for City's defence. He felt the full force of a couple of hefty Zabaleta tackles early on but never stopped looking for the ball and trying to take on City's right-back.

Brought on to firm up the Barca defence after City pulled a goal back, allowing Mascherano to push into midfield.

Replaced Alves on the right but did not get forward with the same conviction.

Did not have enough time to have an impact on the match.