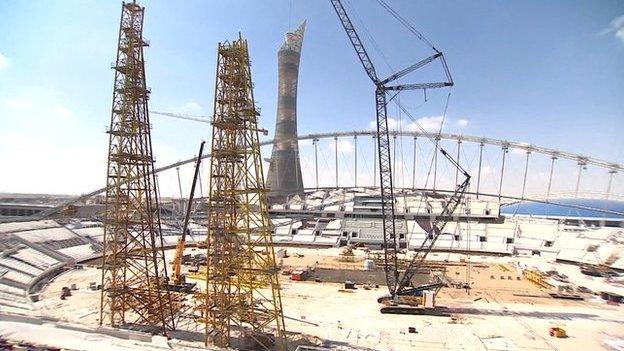 Despite its proximity, the air-conditioned splendour of Doha's National Convention Centre - where some of football's most powerful figures met today to move the Qatar 2022 World Cup to November - seems a million miles away from the sprawling labour camps on the outskirts of the city.

In these camps many of the country's 1.4 million migrant workers have to put up with the kind of squalid conditions that our report on Monday evening highlighted.

Ever since the Guardian newspaper exposed human rights abuses against labourers in 2013, Qatar has been under mounting pressure over its treatment of blue-collar workers.

The death toll is not decreasing

In May, under scrutiny from Fifa, the media and human rights campaigners, the government in Qatar pledged to reform the restrictive kafala system of sponsorship - in which employers effectively own labourers and control their freedom to leave the country - and promised to implement proposed changes "as quickly as possible".

In December, the nation's Emir - Sheikh Tamim bin Hamad Al-Thani - admitted there had been "errors and problems", but that authorities were "working seriously on improving the situation".

So, now, more than four years on from winning the right to host football's showpiece event, how much has actually been achieved?

Visit the vast Khalifa International Stadium - one of the flagship venues for the World Cup - as I did this week, and the signs are encouraging. Qatar 2022 sites like this have adopted higher standards. Workers benefit from decent accommodation, and stricter health and safety regulations.

The reforms will continue, but it remains to be seen how the timing will play out

But for workers on other infrastructure projects, in places like Lusail - a brand new city to the north of Doha, being built entirely from scratch - the record can be mixed, as contractors hurry to push through huge construction plans.

"There is a clear political and commercial willingness for reform, and action in the implementation is under way," says Dr Ray Jureidini, a human rights expert at the Qatar Foundation, a body that has advised the Qatar government on the issue.

"There is an impetus or momentum that suggests there is no stagnating or going back, even though there is still a long way to go. The reforms will continue, but it remains to be seen how the timing will play out."

Over the past 18 months, a set of standards for migrant worker welfare has been officially adopted by the major clients of the state, namely the Supreme Committee for 2022 World Cup, the public works authority, and QRail.

These cover recruitment - including a ban on workers paying recruitment agencies - transport, food provision, accommodation, and health and safety. Another recent measure has been a requirement that companies pay their employees by direct deposit to ensure workers receive their money on time. 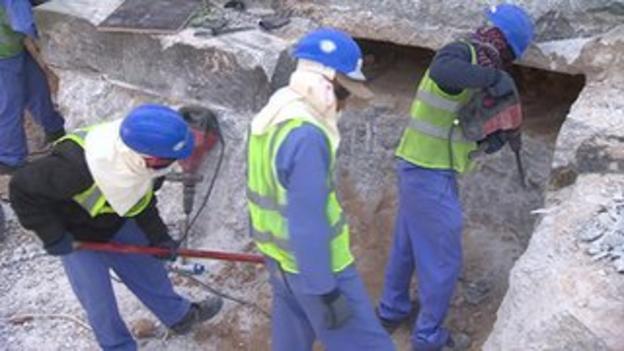 "Although it is early days in the implementation of the standards, there have been serious and progressive actions taken to cancel contracts with firms who cannot or will not comply with the standards," insists Dr Jureidini.

"It takes time to overhaul an entrenched structure that is the basis of the political, economic and social system. Reform of the kafala system will apply not only to migrant workers in the construction sector, but also to professionals. So the government has to tread a fine line in catering for all the stakeholders.

"I am hopeful, however, that substantial progress can be made to the reforms currently under way over the next two years or so. If the procrastination can be overcome and more energy and resources given to the eradication of the worst elements in the system, there should be considerable improvement the conditions for success of the World Cup."

But, for many, the reforms are simply too slow, particularly the reform legislation.

Sharan Burrow, general secretary of the International Trade Union Confederation, is one such critic.

"Nothing has changed," she told us from her office in Brussels.

"The laws are inadequate. There is no freedom of association. A poor worker from an Asian or African country will be forced to give illegal fees to a recruitment agency to get a job for which they are desperate.

"They arrive in Qatar to find their contract is often torn up. They are paid half the wages and are forced to live in squalor - often insanitary conditions for the lavatories. It's a disaster and it doesn't have to be that way."

In December the Guardian learned that Nepalese migrants building the infrastructure to host the 2022 World Cup have died at a rate of one every two days in 2014 - despite Qatar's promises to improve their working conditions.

Qatar has admitted that 964 workers from Nepal, India and Bangladesh died while living and working in the Gulf state in 2012 and 2013, and pledged last year to reform the kafala system.

But Burrow is far from satisfied.

"The death toll is not decreasing," she says. "We know from just two sources - the Indian and the Nepali figures - that more than 4,000 workers will die before a ball is kicked in Qatar. It needs to act like a decent global citizen. They're not poor.

"The kafala system is still in place. It's a system of slavery in the 21st Century and it must change if Qatar is to find its place in the modern, civilised nations that respect that people have human rights.

"Fifa could have acted two or three years ago. They could have said, and they can still say, that the World Cup won't go ahead without labour rights.

"The Qataris want the World Cup - this would force them to change. But while Fifa has the burden of slavery attached to its games, then nothing will change if they don't make a stand."

The Qatar government declined to comment on our report, but those close to it point out that patience is required in a country grappling with a period of unprecedented development and growth, and which relies on support from foreign workers like few other places on earth.

"It is difficult to assess whether implementation of reform is being done in a timely manner," says Dr Jureidini.

"Clearly, the many violations of human and labour rights means that reform is urgent, and more particularly so because of the development requirements for the World Cup.

"Unless and until the conditions and treatment of migrant workers involved improves measurably over the next two years or so, particularly for those who are not being paid or paid properly and whose conditions of work and living are not tolerable, then there may be considerable conflict and disruption in the lead up to the World Cup."